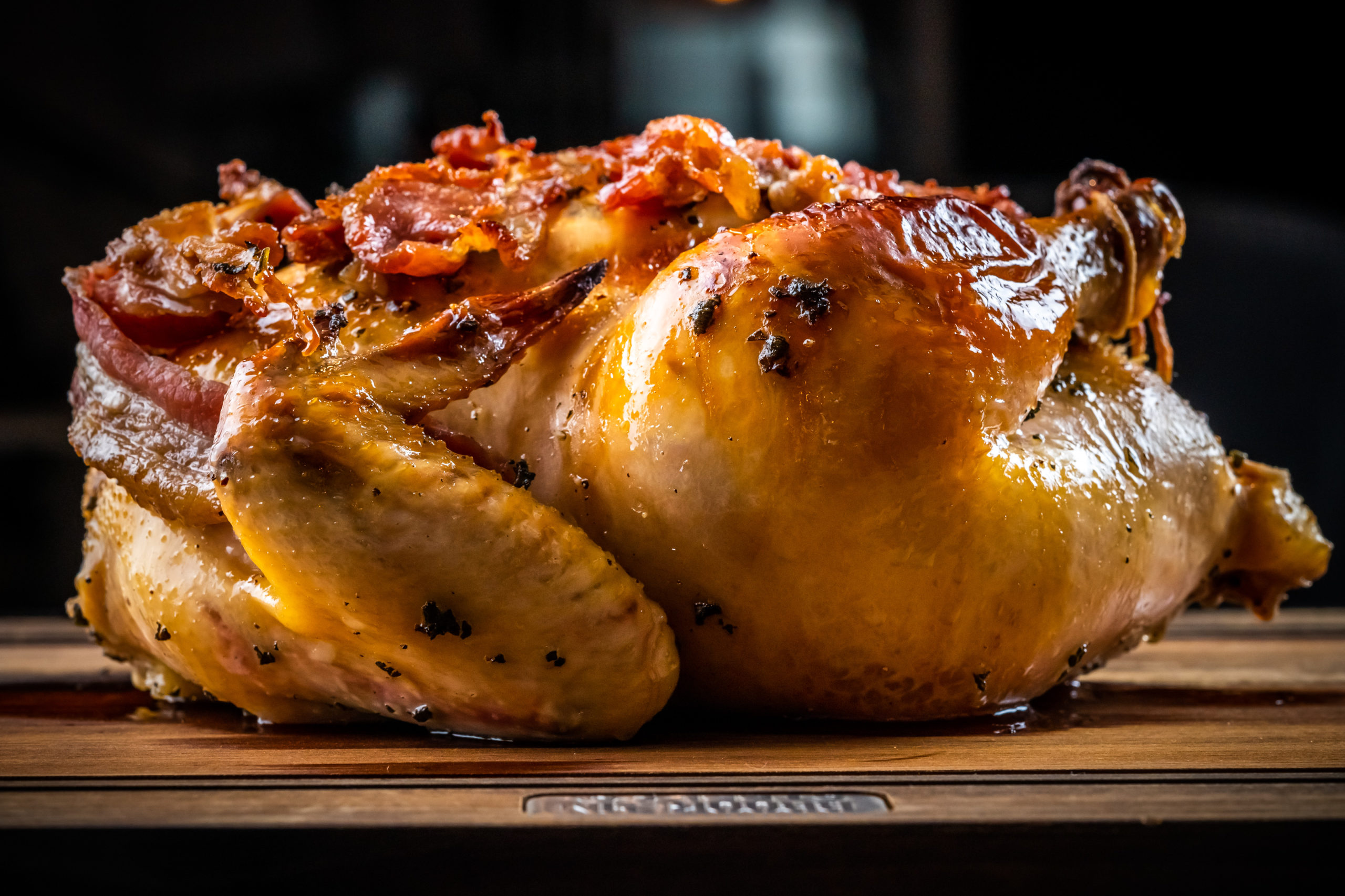 You may be thinking, Allison, it’s the beginning of October, it’s a little early for turkey don’t you think?

But if you’re wondering that, then you may not realize that Canadian Thanksgiving is the second Monday in October!

And can I just note how amazing it is to be in such an interconnected world? The internet may be trash sometimes, but without the web we’d all be so much less likely to be exposed to cultures and countries outside our own.

But thanks to the internet, I’ve been introduced to new foods and holidays and cultural norms… such as my Canadian friends celebrating their Thanksgiving a month before ours!

And… since it’s Canadian… what’s more appropriate than a maple-glazed turkey?

If you’ve been keeping up with our videos then you may have an inkling of what’s coming up soon… but if not, I’ll keep it a surprise!

Step 1: pretend this chicken is a turkey, because it’s October! And I’m in California! And I can’t find a reasonably priced turkey that will fit in my teeny tiny oven anywhere! Have you seen the size of my oven? There is NO way I could fit a 14lb turkey in there.

We want the skin to dry out a little so it has a better chance of crispiness. So put your whole turkey/chicken on a rack in a roasting pan, breast-side up, and let it sit out at room temperature for an hour.

Also, make sure you remove any giblets or neck that came with the turkey – there’s usually a bag inside the body cavity. Although… are you even a real cook if you haven’t accidentally cooked the giblets bag at least once? I definitely have. Unfortunately this chicken didn’t come with ANY giblets. I feel cheated!

While your bird is coming to room temperature, mince some fresh sage leaves. This is what will give it that really “Thanksgiving” smell – it’s floral and earthy and almost pine-scented. Stir that into some room temperature butter that we’ll be using to slather our turkey, and then season that with kosher salt and freshly ground black pepper.

Before preheating (although let’s be honest, I regularly forget to do this ahead of time and always end up hanging a hot rack on our pot rack – say that five times fast) put the oven rack in the bottom third of your oven so your turkey will fit, and remove the top rack. Now, preheat your oven to 350F.

Before we butter ’em up, liberally sprinkle the turkey with salt and pepper, and use your hands to rub it both inside and out so as much as the turkey as possible is seasoned. Really get in that body cavity.

Once your turkey is seasoned, spread the sage butter over the entire turkey. Since it’s butter, it got pretty slippery, so I just tried to dab it on as much of the surface area as possible. Ease your hand under the skin, and slowly pull the skin away from the meat, getting as far under the skin as you can get without tearing the skin itself. Then stuff some of the butter under the skin as well, trying to get an even layer.

Truss the legs with kitchen string. This helps prevent the skin from burning, but also works to keep the meat moist by minimizing the surface area of the bird.

And – since this is a maple-glazed turkey after all – we’re going to baste our turkey with maple syrup that’s been diluted with a bit of hot water. Since the butter is rather precariously attached to the skin, I kind of dribbled the syrup over the turkey, since painting it with the pastry brush would just brush the butter right off. Don’t worry about using all the syrup, as you’ll be basting several times as it cooks.

And now it’s time to cook! Since I’m using a small chicken instead of a big turkey, my timing is quite a bit different, but I’ll give both times just in case.

Either way, expect to be cooking your bird for about 13 minutes per pound. My 4lb chicken only took a little over an hour to fully cook, but a larger 12-14lb turkey may take closer to 3 hours or more.

Every so often, baste your bird with more maple syrup. For a larger turkey you can do this every half hour, but for my small chicken I did it every 15 minutes.

When about 2/3 of the time has passed (so for a larger turkey, after 2 hours; for our smaller chicken, 45 minutes), take the bird out of the oven, and lay strips of bacon over the breast. Since our chicken was starting to brown quite a bit, we also put bacon over the legs and wings… because more bacon is always a good thing.

Baste the bacon-covered bird with the maple syrup again.

If you have an oven-safe meat thermometer, then insert that in the meatiest part of the thigh, without touching the bone, and put the turkey back in the oven. I just tested the temperature every time I took it out to re-baste.

From here, you’re cooking the turkey until the temperature hits 165F. Continue basting every half-hour. If the bacon is fully cooked before the turkey is done, you can cover it with foil so it doesn’t burn.

When the temperature hits 165F and the juices run clear, remove your bird from the oven! Tilt the turkey so all the juices run out into the pan – Shrimpy will be using that for gravy next video.

Then place your turkey on a cutting board, tent it with foil, and let sit for half an hour before carving.

Et voila – we are ready to eat!