On our fifth day in Japan, we spent the morning without Rachael and her family, as they had another commitment.

So what did we do with our time by ourselves? Well, our first order of business was Beard Papa’s. Which, by now, probably doesn’t surprise you one bit. 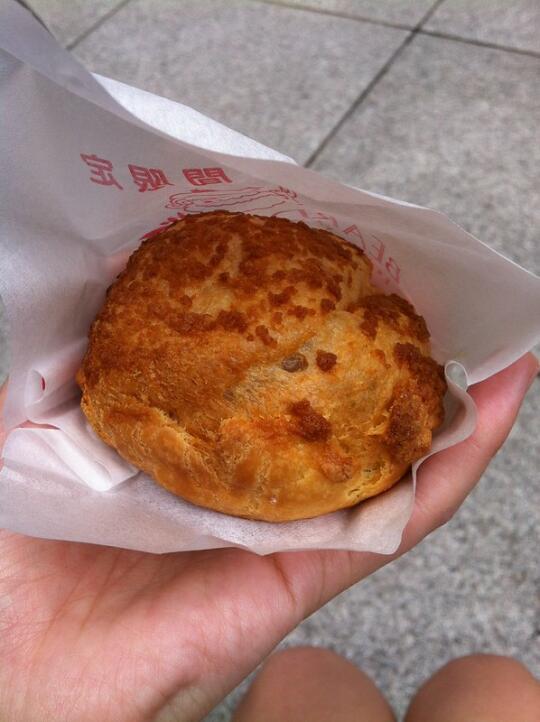 On this visit, we got two types of cream puffs.

This coffee cream puff had a crunchy exterior, with a coffee custard mixed with coffee jelly cubes inside.

Our second cream puff was one that Rachael insisted we try – the shiro cream puff.

The shiro cream puff (“shiro” means “white” in Japanese) was made with tapioca flour instead of regular flour, which gave it a chewier texture – almost mochi-like. 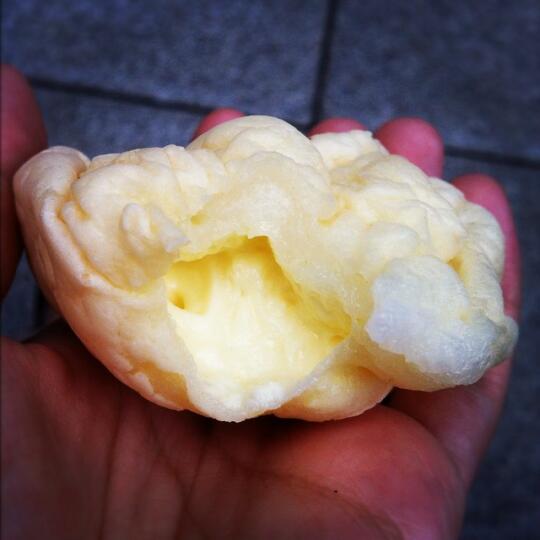 And on the inside, rather than having a custard filling, it had a cream cheese-based filling.

Holy cow. This instantly became our very favorite (aka we’re totally obsessed and incredibly sad we can’t get them in the US) type of Beard Papa’s cream puff.

After gorging ourselves on cream puffs (just kidding, we shared both of them), we wandered around a bit, exploring the area. 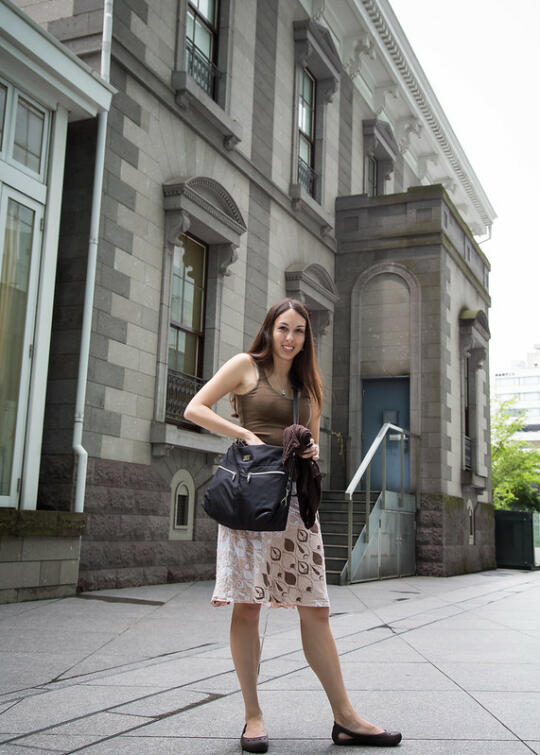 We found the Old Shimbashi Station – what used to be Shimbashi station, before it was replaced with the gigantic station that is in use now. 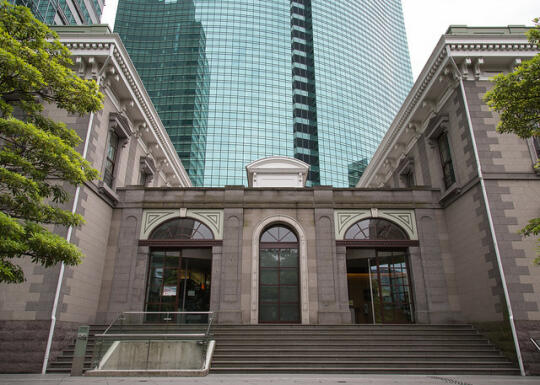 It was pretty interesting to get to see the history, even if we couldn’t always understand everything. 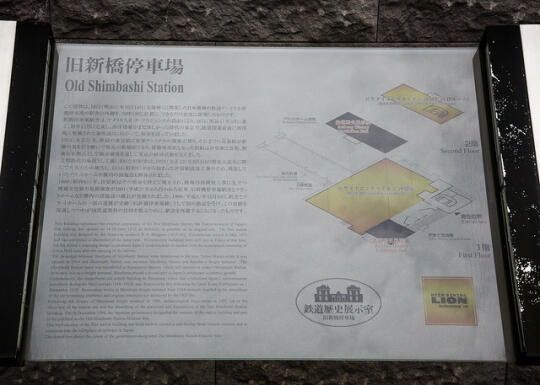 Then we went in search of Don Quixote (aka DonKi).

This place is… craziness embodied. It’s pretty much a Walmart on crack, in about 1/4 of the space. 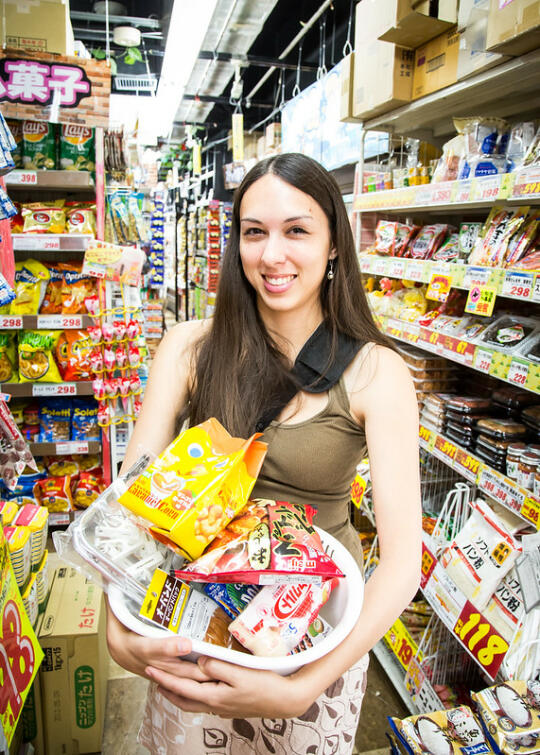 And we went a wee bit crazy. But can you blame us? Their snack section is insane! 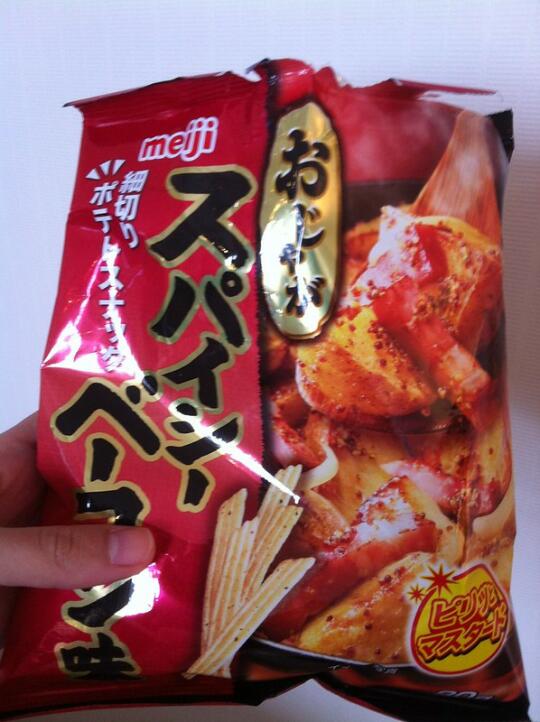 These mustard-flavored potato chips are weird, but oddly addictive. 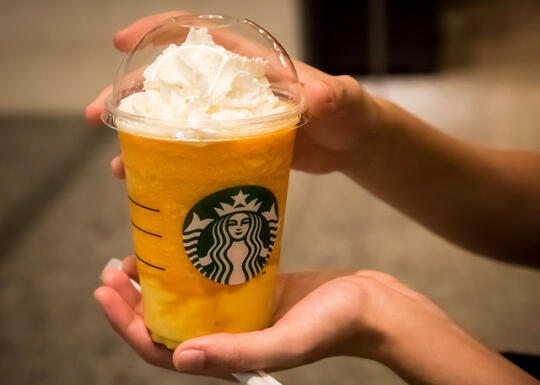 It was a ridiculously hot day in Japan, so after all that walking about, we headed to the Starbucks across from our hotel and bought something you can’t find in the US – a mango passion tea frappucchino, with mango pudding cubes mixed in.

At 630 yen (about $8) it’s definitely not something I’d buy again, but it was worth trying once, and actually pretty good!

After a short nap, we met Rachael and her family downstairs, then headed off to Bassanova so they could try it too (because seriously, I will never turn down an opportunity to eat at Bassanova!)

(Oh, and remember that picture we had of a bunch of people taking pictures of some huge poster in the train station? Well, the photo above is from the perspective of the poster – Son actually ran out in front of it, stopped to take a quick picture of all the people taking pictures, then darted away!)

Once again, I got the green curry soba. 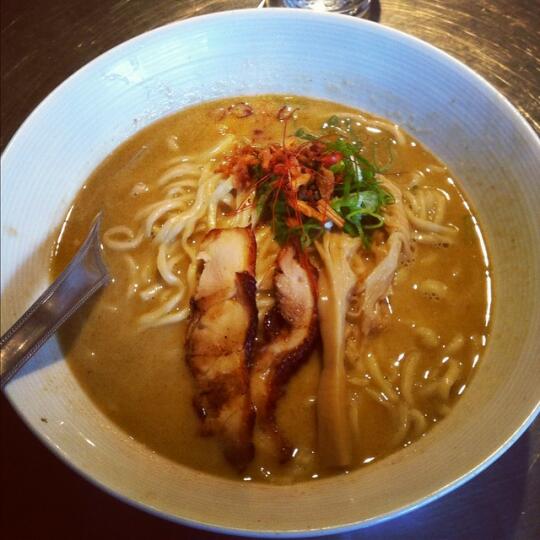 This time, Son tried the cold ramen that they only offer during the summer. It tasted like it has a definite Vietnamese influence.

But the ramen, for once, was not the coolest thing about visiting Bassanova.

No, the coolest thing about that evening was that we got to meet Kate!!!

Kate is one of our awesome Miso Hungry Podcast fans who lives in Japan. She’s been super-sweet to us, so we thought it would be cool to get to meet her while we were there. (She says she’s our #1 fan! ^_^) 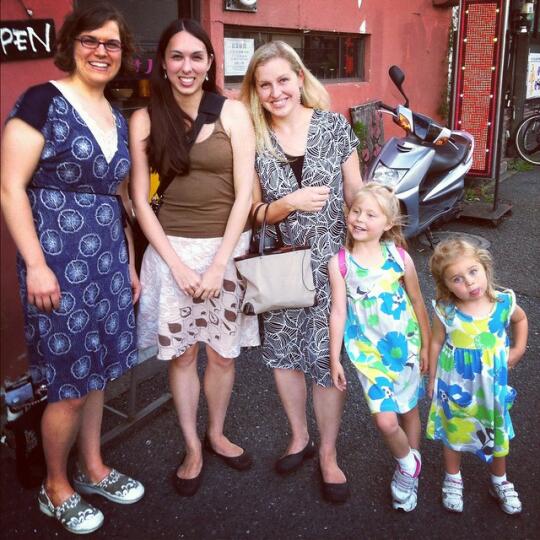 Kate is now one of our very favorite people. Seriously, she rocks so much.

But… unfortunately, thanks to a gluten-intolerance, Kate couldn’t partake in the ramen with us. (I know, we felt so bad!) So after ramen, we walked to a combini to find some things she could eat.

(And, uh, remember how I’ve mentioned my boyfriend has a bottomless pit for a stomach? Yeah, that’s why we ended up with more food, too – a meat bun and some sort of Korean onigiri.)

We headed off to a park, where we sat and ate for a bit (and then got eaten by the bugs).

Kate was sweet enough to run around with the girls (she is SO good with kids. Seriously, I cannot rave enough about this woman.), and Son wandered off to take some pictures.

These pictures of the park? They were taken in near complete darkness. Seriously. Son has a freaking ridiculous camera.

Sadly, we had to say goodbye to Kate soon after, since she had to catch the bus back home. But stay tuned, because this wasn’t the last we got to see of her! ^_^