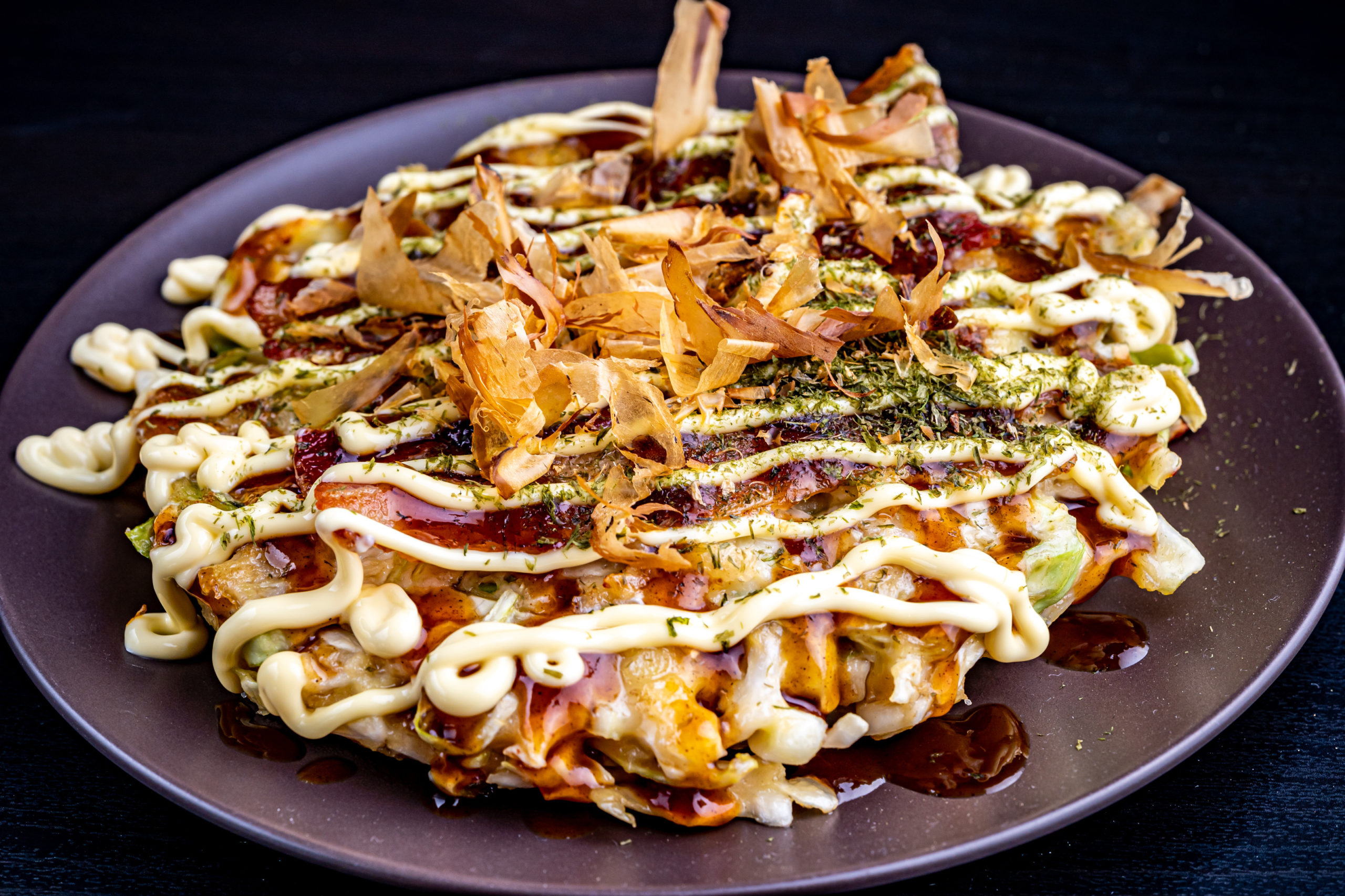 We’ve got another busdriv3r cookbook redemption! This time, he requested that we make something from Japanese Soul Cooking

I’m always down for Japanese food, and it was a tough decision! But one dish that I LOVE and will happily take any opportunity to make is okonomiyaki.

Okonomi means “how you like” and yaki means “grilled”, so okonomiyaki roughly translates to “grilled how you like”.

… which doesn’t really tell you what okonomiyaki is, does it.

Okonomiyaki is essentially a vegetable pancake. It usually is made up of cabbage and a batter, and often you’ll see pork belly or other meats or veggies layered in.

Sometimes you’ll see nagaimo used in okonomiyaki. Nagaimo is a type of yam, and when you shred it up it gets kind of gooey. That gets mixed into the batter. We won’t be using it today, but if you ever see it in a recipe now you know what it is.

Okonomiyaki is almost always topped with okonomi sauce, which is a worcestershire-based sauce and could be thought of a somewhere between A1 and a BBQ sauce. Then it’s drizzled with kewpie mayo, and sprinkled with aonori, which are seaweed flakes, and katsuobushi, which are shaved dried bonito flakes. You’ll also often see it served with beni shoga, which is the red pickled ginger strips.

So now that we know what okonomiyaki is – let’s cook!

We’ll start by making the batter. Two cups of regular, all-purpose flour go in a bowl.

Then add a cup of liquid. You could use water, but we’ll be using the dashi that Shrimpy made for us.

A teaspoon of salt.

And a teaspoon of baking powder, for fluffiness.

A couple teaspoons of sugar, to balance out the flavors.

Mix that all together.

And then the main ingredient. Chop up a head of cabbage – you’re looking to end up with one pound, or about 10 cups – and add that to the bowl.

Mix really well – about 30 seconds or so – until all the cabbage is coated in the batter.

Now we’re going to add four eggs, to bind it all together. Mix that another 15 seconds, until it’s all just combined.

Preheat a nonstick or cast iron pan over medium-low heat until it’s nice and warm, then add in a tablespoon of sesame oil.

This recipe makes four okonomiyaki, so we’ll put a quarter of the batter in. Aim for a pancake about 6″ in diameter, and 1″ thick. Don’t press it down – we want a fluffy pancake!

Then we’ll add our meat. The recipe calls for pork belly, but since it’s a lot easier for me to get bacon than pork belly, I tend to use bacon for my okonomiyaki. It’s not the most traditional, since american-style bacon isn’t common in Japan, but it’s tasty nonetheless. Regardless, layer your meat on top of your okonomiyaki.

Repeat with the other three pancakes, and then…

Sprinkle with some aonori.

And don’t forget the bonito flakes!

Cut it into quarters, and your okonomiyaki is ready to serve!