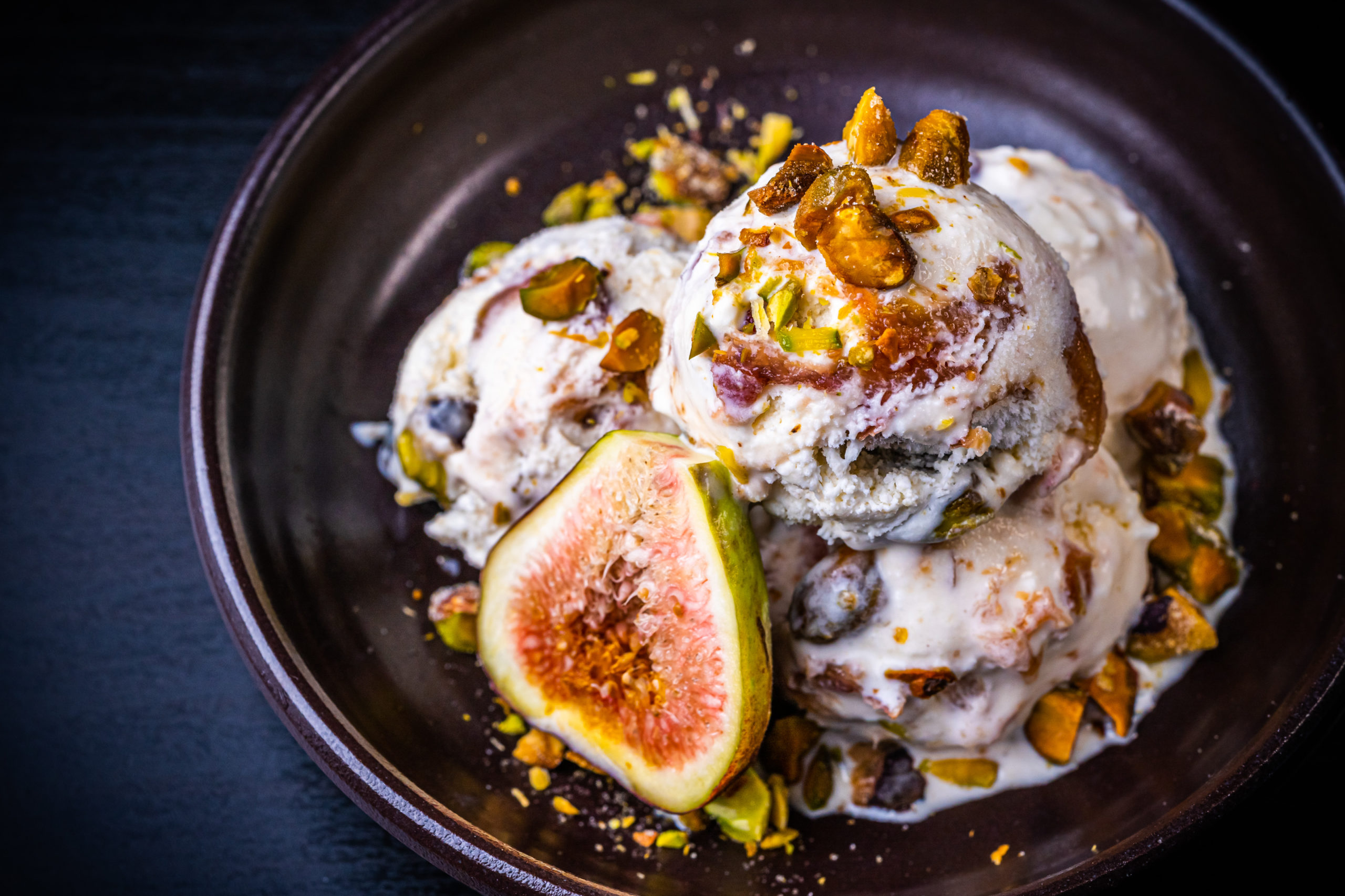 The thing about having a YouTube cooking channel… is, OH DARN IT’S FIG SEASON, GUESS WE HAVE TO MAKE A BUNCH OF SEASONAL DISHES.

We thought about tiptoeing over to our neighbor’s fig tree under the cover of night, since THEY’RE not eating them… but the local squirrels got to them first.

So I bought some figs.

And then I had to figure out what to do with them.

Can’t do the tarts, we already did those.

Oooh, that looks good, and that… and why is every recipe Son picked out an ice cream recipe?

So off we went to my mom’s-

So we called AAA, got our battery replaced because it was apparently actually dead, and off we went to my mom’s to borrow back our ice cream machine that she has permanently borrowed. It’s pretty much hers at this point.

Cleared out some space in the freezer (why do we still have those really old popsicles, anyways?) so we could freeze the ice cream maker thing…

and an entire journey later

This ice cream recipe comes from a blog called Happy Yolks. I’d actually bookmarked a vegan version of this ice cream, but since we’re not vegan, I traced my way back to the original recipe.

We’ll start by making a caramelized fig jam that’s going to be our swirl in the ice cream.

Melt a couple of tablespoons of butter in a saucepan, over medium heat. Unless noted, you’ll always use unsalted butter when you’re cooking – this will allow you to control the amount of salt that’s added, rather than being at the mercy of the butter maker.

Once the butter is melted, dissolve a half-cup of brown sugar into it. It’ll start to smell like toffee.

The recipe says to cut about a pound of figs in half, but if I were to make this again, I’d cut them into quarters or even smaller. The skin doesn’t break down as much as I’d like when it cooks down, so expect to end up with chunks about as big as you cut them in the end result. Add them in with a bit of water and lemon juice. Let this all cook down, about 15-20 minutes, until the figs are chunky and jammy. At first it’ll smell bright and fruity, but as it cooks it’ll begin to smell deeper, more caramelized, more jammy, reminiscent of a tasty pie. The change in fragrance takes you from late summer to mid-fall.

Add a half teaspoon of salt – it may seem odd to add salt to a savory dish, but that slight bit of salt will really bring out the flavors in the jam. Stir it in, and set the jam aside to cool completely.

Next, it’s custard time. We’re making the base of your ice cream. Combine the milk, heavy cream, and granulated sugar in a saucepan over medium heat, until the sugar has dissolved.

Then you’ll temper your egg yolks by whisking a small amount of the hot liquid into the yolks before whisking them into the custard. When your yolks are whisked in, place your custard in the fridge and wait for both the custard and fig jam to completely cool.

Once everything is nice and cool, it’s ice cream time! Using an ice cream machine, pour the custard into the machine and process however the instructions tell you to. The custard should slowly thicken into a soft ice cream as it freezes in the machine.

Whenever your custard thickens, now it’s time to add in a bit of mascarpone cheese for tang, the fig jam, and some honey roasted pistachios for a bit of texture.

Let that process for about another 10 minutes, and then pour your ice cream into a freezer-safe dish. Stick that into the freezer for at least 2 hours. When you’re ready to serve, let the ice cream sit out for a few minutes until it’s scoopable but not melted.