If you live near Torrance, CA or New Jersey, and if you like Japanese food (which, if you don’t, I hate to tell you this might not be the right food blog for you… 😉 ), then you MUST go to the Mitsuwa Japanese Gourmet Fair this weekend (next weekend if you’re in New Jersey). (Also, if you live near Costa Mesa, San Jose, San Diego, or Chicago, they all have smaller versions of the fair, so those stores may have some, but not all, of the things I mention here.) 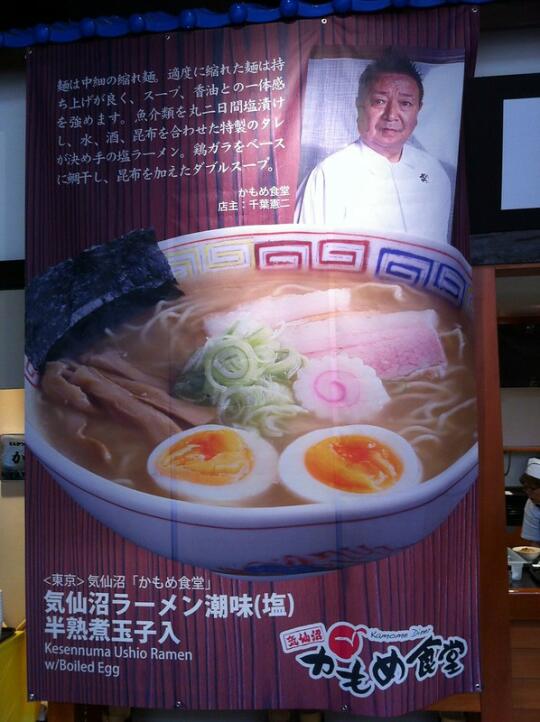 Mitsuwa has these food fairs every year and I always try to make a point to go, because there is always SO much good food to try that they don’t normally carry!

I visited Friday, and let’s just say that my tummy is in a very happy place right now. 😀

First things first, let’s talk about the food that they sell to be eaten there. Because oh my goodness, I think this food fair was my favorite of all the ones we’ve been to.

If you haven’t ever been to a Mitsuwa, then you should know that every one has a large food court with about five or so different Japanese restaurants there, as well as assorted other shops, and a large grocery section. For the food fairs, Mitsuwa takes over one of the restaurants and brings in a restaurant from Japan. 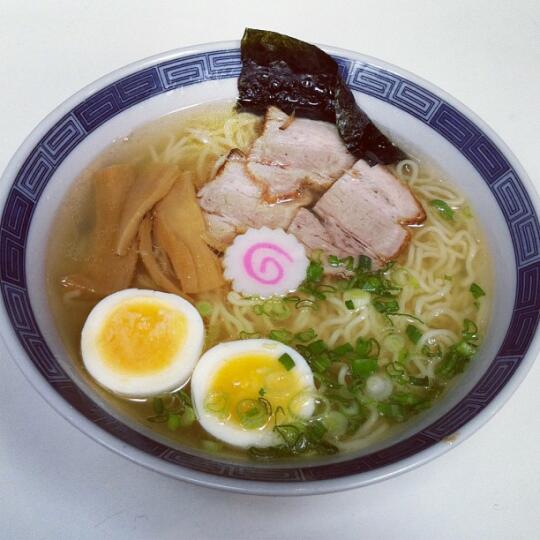 We LOVED the ramen. A lot of time ramen can be pretty heavy, but since this had a chicken-based broth instead of a pork base, this was really light. The chashu was incredibly flavorful. We could have happily eaten another bowl. ($11 with the egg, less if you go without.)

(Pardon the instagram photos – someone forgot to bring his camera.) 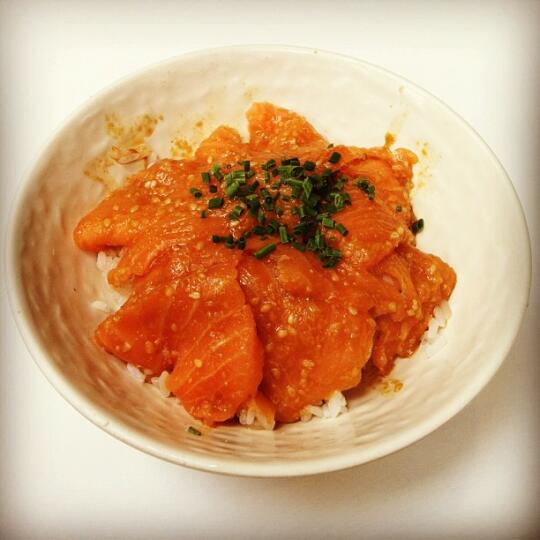 I wasn’t expecting much from this, but it was insanely good. The sauce was a little bit sweet, and perfect for the fresh salmon. Seriously, so good we went back for a second bowl (and at only $4, totally worth it!) Even as we were eating it, Son was telling me that we will have to replicate this at home – so hey, maybe you guys will get a recipe sometime soon!

That was it for the food court (although all the other restaurants are still open, so you could totally have takoyaki, okonomiyaki, ramen, or all sorts of other delicious things, at least if you’re at the Torrance store!), but there was plenty of packaged food available to purchase.

We didn’t buy/try everything (some of the stuff is CRAZY expensive, like seafood salads that cost $40/lb!!!), but here’s what we did get: 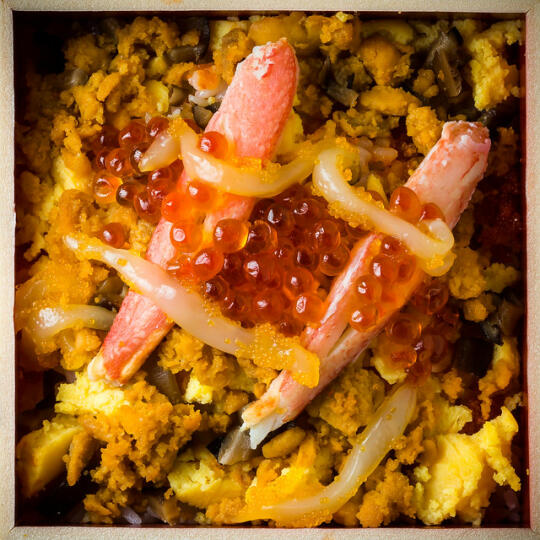 This seafood bento (which I’d call a chirashi, because there was definitely sumeshi underneath all that seafood, but what do I know? 😉 ) was so beautiful, we couldn’t pass it by. Son really wanted to try it. 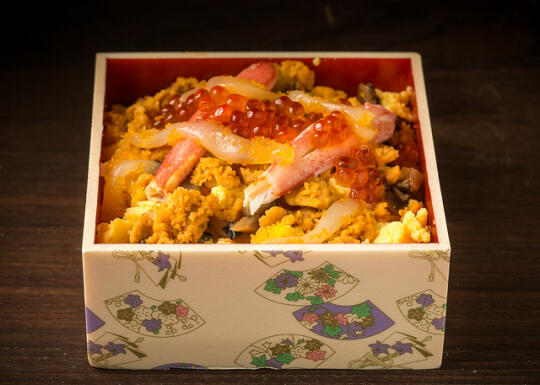 It’s a little pricy at about $16, but SO WORTH IT. It consists of sushi rice topped with a mixture of uni, tamago, mushrooms, two types of tobiko, ikura, crab, and… I’m not entirely sure what that translucent white thing is, but it was delicious. 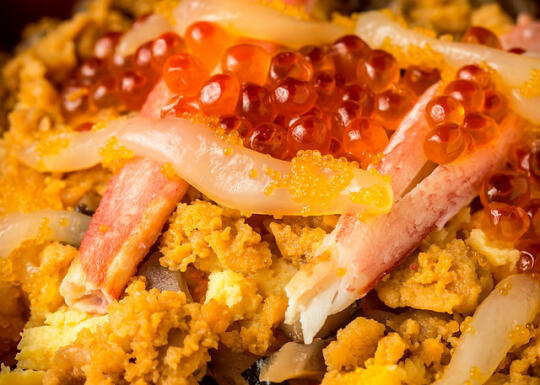 I have never tasted such a satisfying bento/chirashi before! Everything was fresh, perfectly seasoned, and all the ingredients were wonderfully complementary, not to mention the presentation is gorgeous. Son really wants to go back tomorrow and get another one. 😀 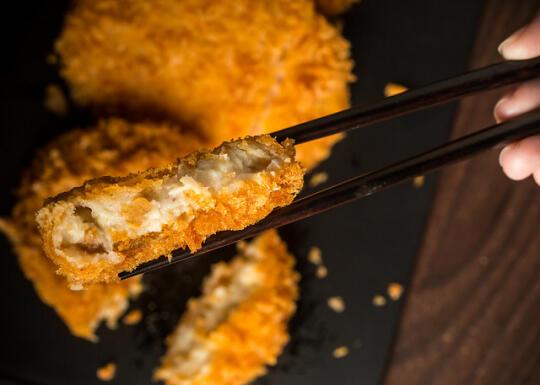 When we bought these, Son was all, “Meh, I don’t really like croquettes, just get whatever you want.”

And then he actually tried them after taking the photos, and was more like, “OMG THESE ARE THE BEST THINGS EVER! WHY AREN’T ALL CROQUETTES THIS DELICIOUS?!?!”

(Okay, maybe not so much yelling, but you could tell that’s what he meant. 😉 ) 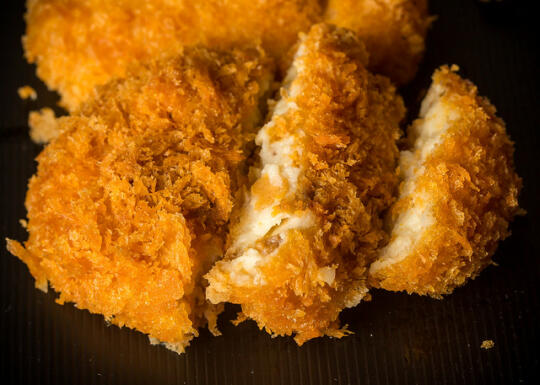 We got potato and butter, salmon cream, and uni cream croquettes. The potato was alright, not too exciting. Tasted like mashed potatoes. However the salmon and uni croquettes were MIND BLOWING. Imagine taking the best things about salmon and uni, then make them creamier, mix them with potato, roll them in panko, and fry them up. It tastes even more amazing than it sounds. 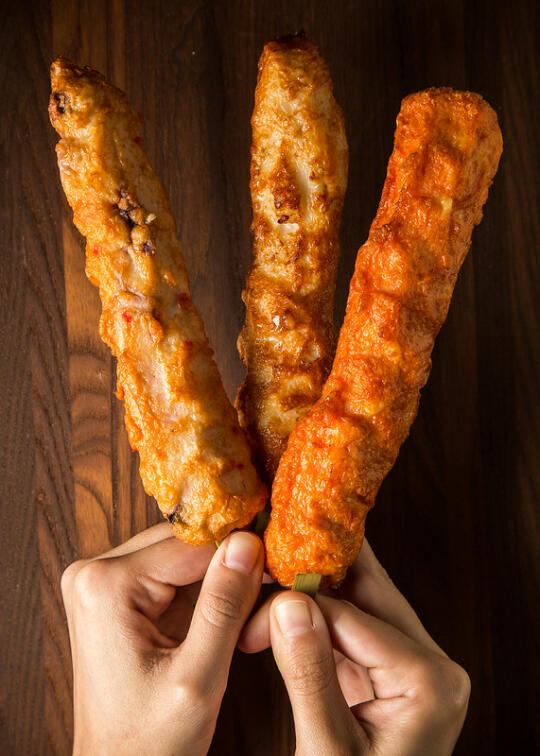 The thing Son loves most about every Mitsuwa food fair is the stalls that sell a huge variety of fish cakes. He always buys a bunch, then brings them home to put in his instant ramen or eat them over rice. They’re pretty much his favorite thing ever.

This time, they were all on sticks. There were six types (not like I have any idea what they all were – sorry!) and we got one of each. 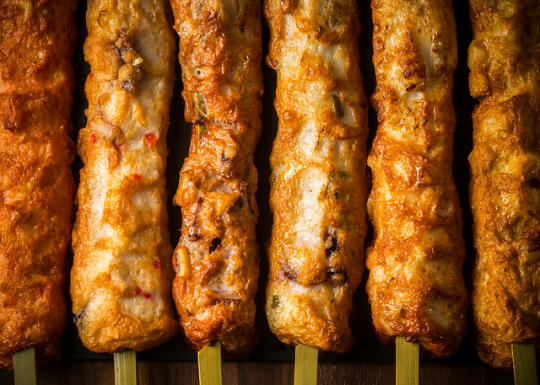 Delicious x 6. (Obviously we had to try a little of each, so we could report back to you!) 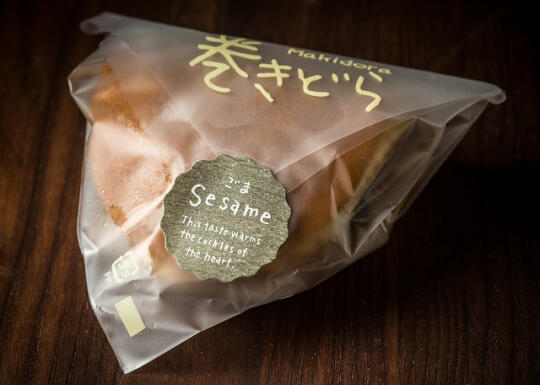 I’m a total sucker for anything black sesame (Rachael is 100% to blame for that one) so I just had to get one of these black sesame makidora (rolled dorayaki – like little Japanese pancakes filled with some sort of filling). 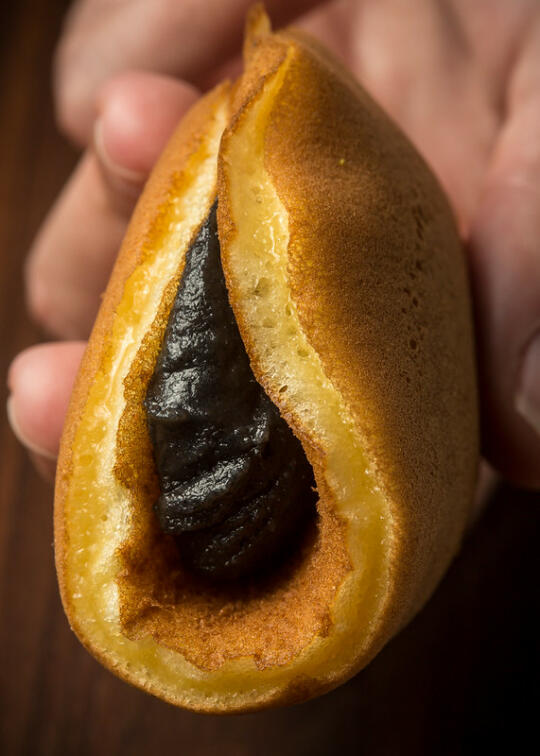 $2 each – they also had red bean, custard, and matcha fillings. 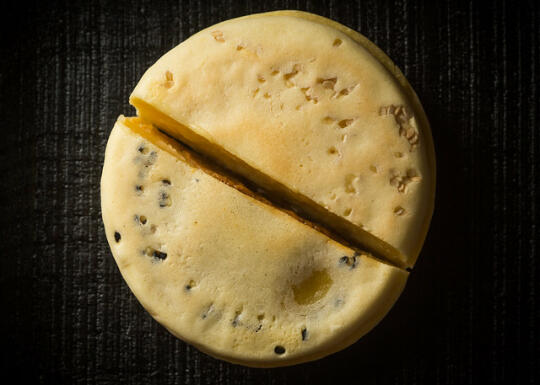 I’ve had something like these Sweet Pumpkin Obanyaki before and wasn’t super enthused about them, but this time, everything was different. We skipped the red bean one, and went for the caramel and custard ones.

So here’s what you do.

Buy a caramel one. (I bet the custard is good too, but I haven’t actually tried that one yet.)

Heat it up just a bit, until the pastry is warm and the caramel is soft.

Take a bite. Make sure you get some of the caramel.

Do a happy dance around the kitchen because it is SO FREAKING GOOD.

Eat the rest, and then wish you had bought a few more at the fair.

Realize that hey, there are still two more days of the fair! 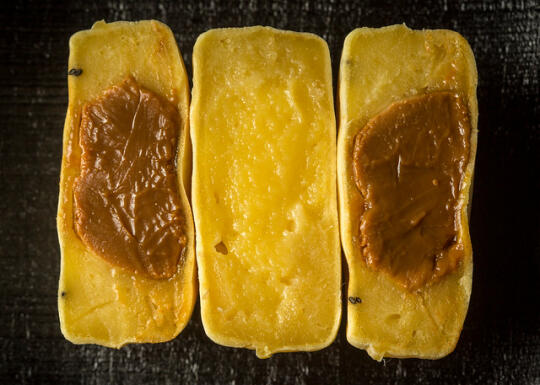 These were quite a bit sweeter than I’d usually expect from Japanese sweets (that caramel is LEGIT caramel!), but I did not mind one bit, they were so good.

$2 each – there was also a red bean-filled one, but I seriously recommend the caramel. 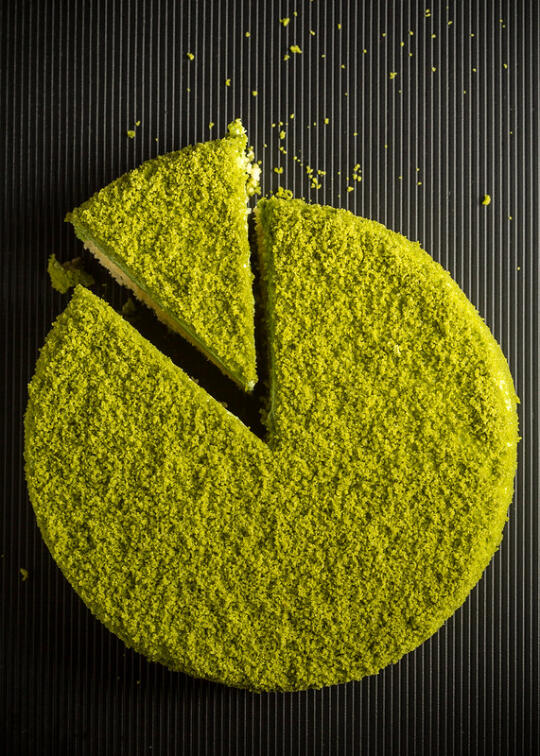 We almost didn’t try this one. Son wanted to buy something for his dad, so he decided on the cheesecake. Then while we were in the checkout line, he piped up, “I kind of want to get another one, because I really want to try it…” So he ran back to grab another one for us. 😉

This is true Japanese cheeesecake. Now, forget everything that comes to mind when you think of cheesecake. This is nothing like the rich, heavy, sweet American cheesecakes you’re probably familiar with. No, this is super light, not too sweet (especially with the green tea flavor), with only the slightest hint of cheese.

In other words, absolutely delicious. 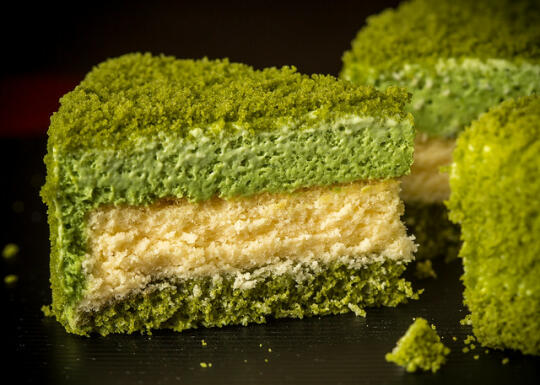 We also got a lemon chiffon cake which we haven’t opened yet because we’re saving it for dessert on Father’s Day (hi Dad!)

So if that hasn’t convinced you that you should go check out the Mitsuwa Japanese Gourmet Fair, you should go read Mary the Food Librarian’s post… and if you’re STILL not convinced, then there’s no hope for you at all. 😉

Personally, Son and I plan to stop by at least once more this weekend, because, um, we kind of want to get more of everything. 😀

Oh, and in case you were wondering, no, I was not paid to write this review. Mitsuwa probably has absolutely no idea who I am. I just adore Japanese food (obviously) and want you all to be able to share in the deliciousness as well!