Japan Day 10, Part 3: In which we get lost, find ourselves, and then get lost again.

After spending the morning getting lost and the afternoon satisfying our wanderlust, we were hungry. Time to eat!

We headed across the river, and found ourself on a large, busy street full of clothing stores and fast food. We could have stopped at a McDonald’s, or Burger King, or Subway (or even Baskin Robbins!), but we weren’t quite that hungry. (Although we did eat at a McDonald’s the first time we went to Japan (for our very first meal!) and it wasn’t *that* bad. Better than American McDonald’s, definitely.) 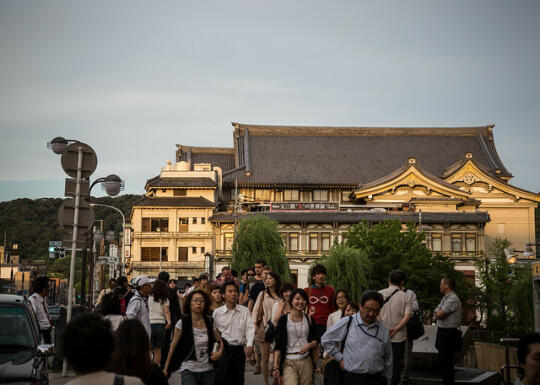 Instead we kept walking, and walking, and turned down another walking-only street, and hey wait a minute, something about this place looks familiar…

Turns out we found our way over to the mall behind Nishiki Market without even realizing we were in the area!

This was a very good thing, because there are lots of good eats in this mall. 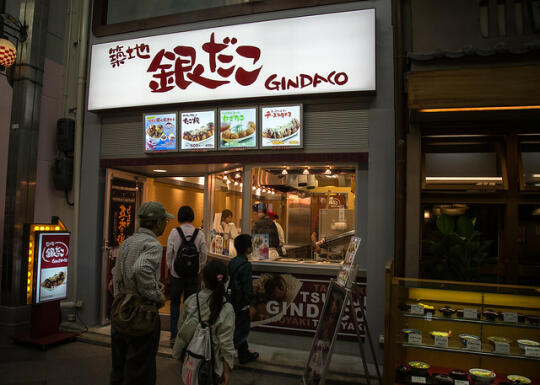 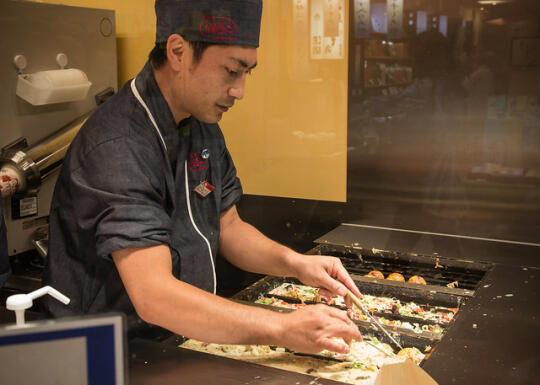 I’ve been on a takoyaki kick throughout the entire trip (and ever since we got home, too!) so when we found a takoyaki shop, of course we had to try it. 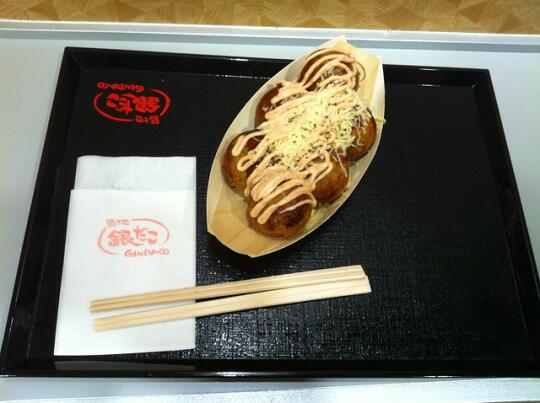 We ordered takoyaki covered in cheese and spicy roe mayo. Yes, it sounds weird, that’s partially why we got it – what’s the point of traveling if you don’t try all the weird foods you can’t get anywhere else? ^_^ 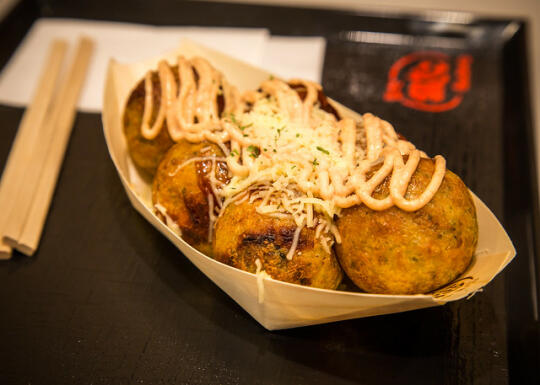 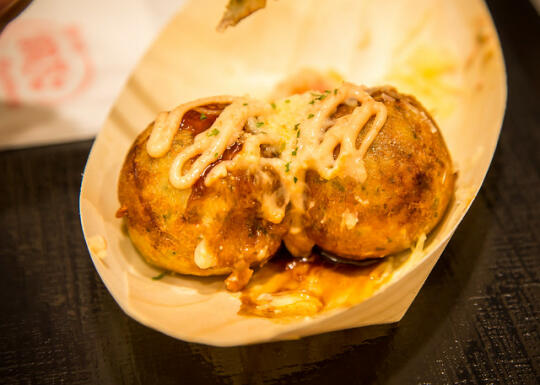 However, as weird as it sounded, it was freaking delicious. I never, ever would have thought cheese atop takoyaki would be a good idea… but it turns out whomever thought of this is a genius. 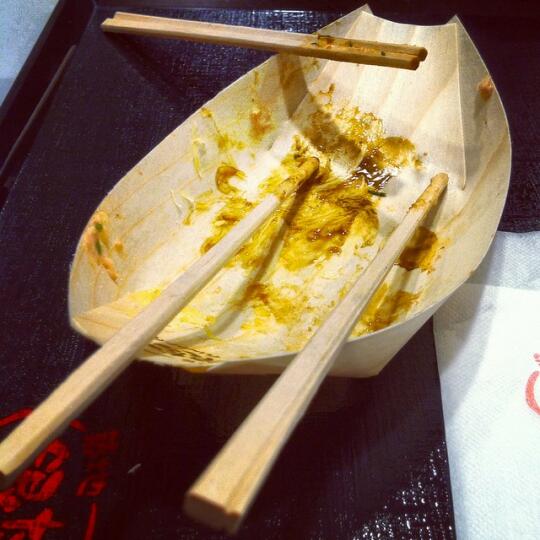 A little further into the mall, we found a place called Churro Star. 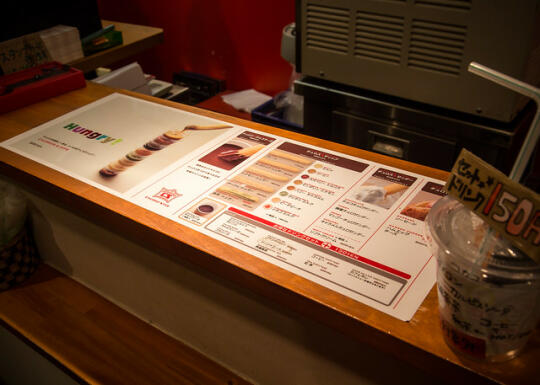 Sounded interesting, so of course we had to investigate. 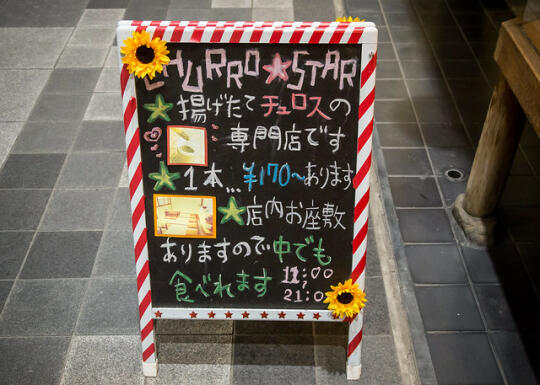 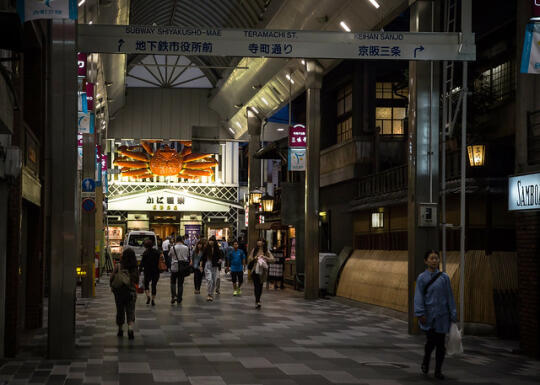 We got a churro that came with something called “strawberry milk” – very interesting. 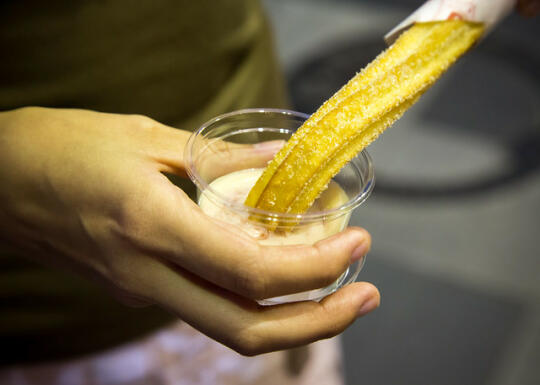 The churro was fantastic. The strawberry milk was… well, it had the texture of caramel, and tasted like a strawberry-flavored Hi-Chew. While you can’t ever go wrong with strawberry Hi-Chews, it was kind of a weird combination with the churro. 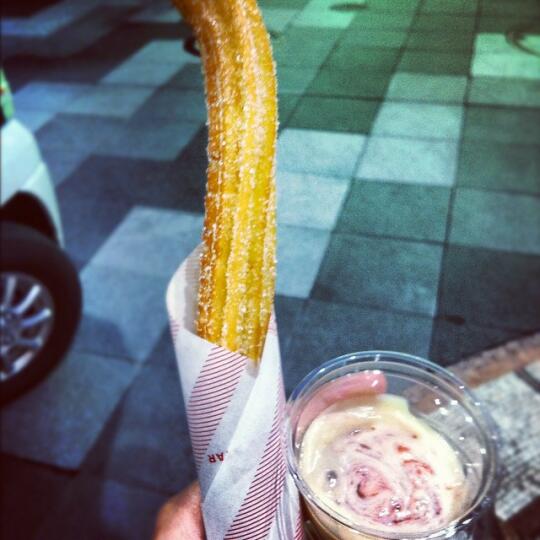 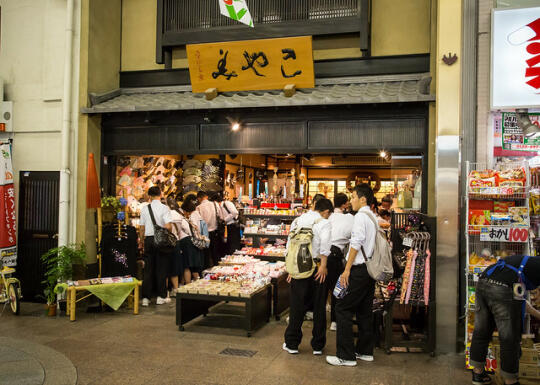 (Even the Subways there are nicer!) 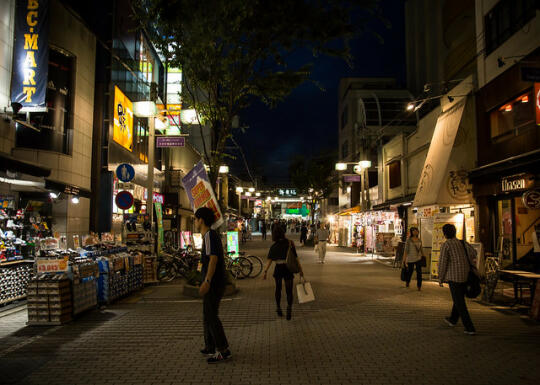 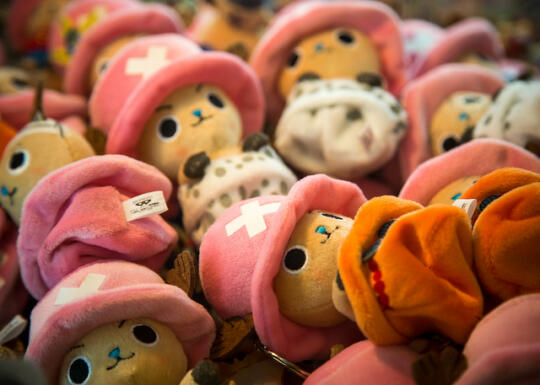 Then we found a sock store. With awesome socks. Yes, I had to buy some. Yes, I actually wear them. (The Totoro ones are my favorite.) ^_^ 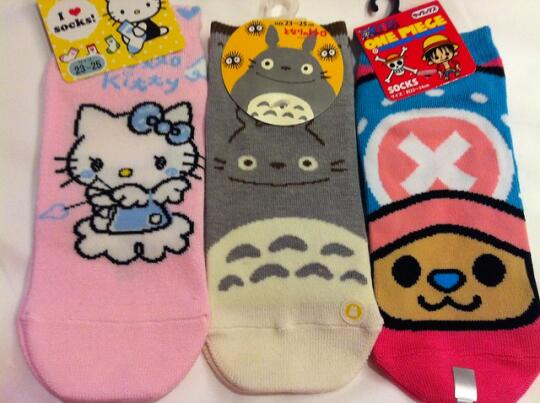 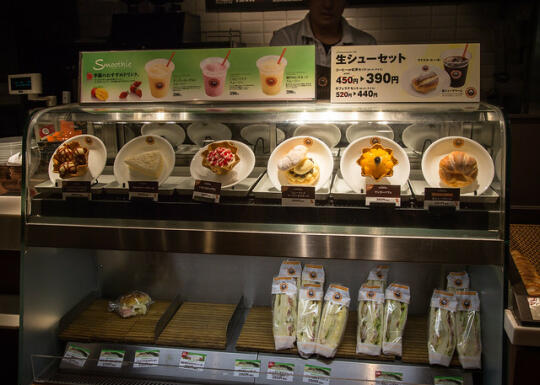 Before we left Tokyo, Rachael said we should definitely try Choco Cro. There was one in the mall by Nishiki Market, so we stopped in and bought one to go. 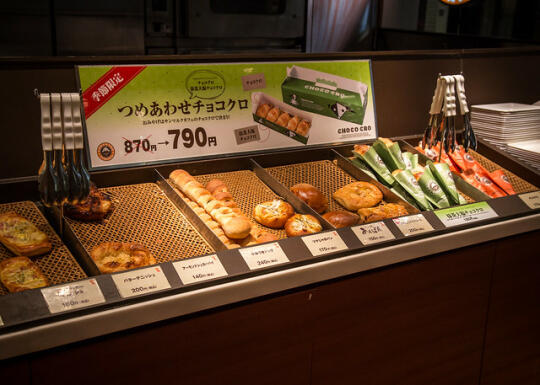 Unfortunately by then, it was late enough that all the restaurants were closed. So we headed back to Kyoto Station… where got lost again… and by the time we found ourselves, everything was also closed. 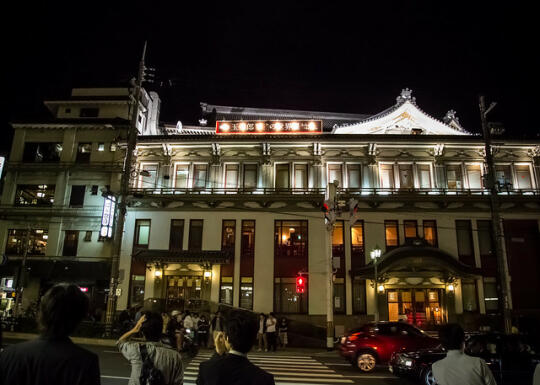 So we went back to our hotel, stopping at a Family Mart on the way. 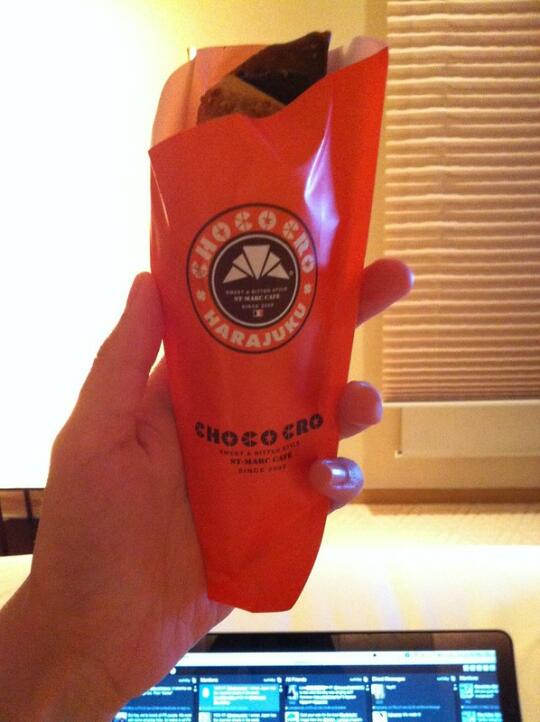 We ate the Choco Cro (chocolate croissant) back at our hotel, and it was delicious. 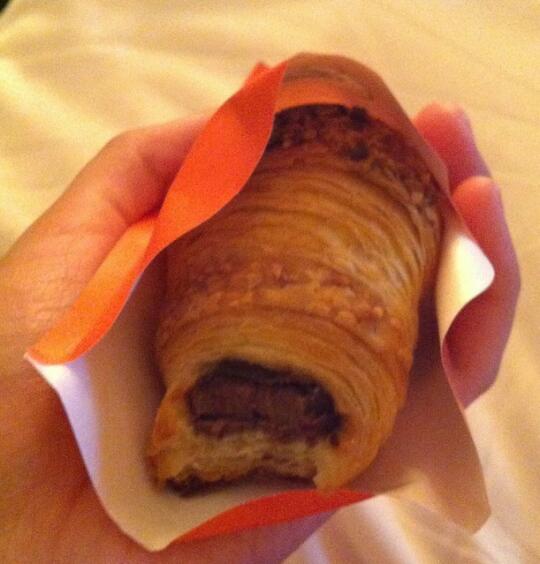 Ain’t nothin’ wrong with a Family Mart dinner, yo. 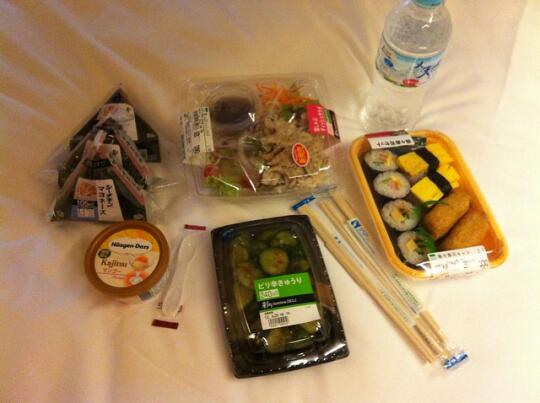 I’ve said it before, and I’ll say it again – convenience store (combini) food in Japan is better than grocery store food in the US. Seriously good stuff.

Sushi, salad, zukemono, and ice cream. And then an Icy Hot bath. All that walking makes for a sore Allison… 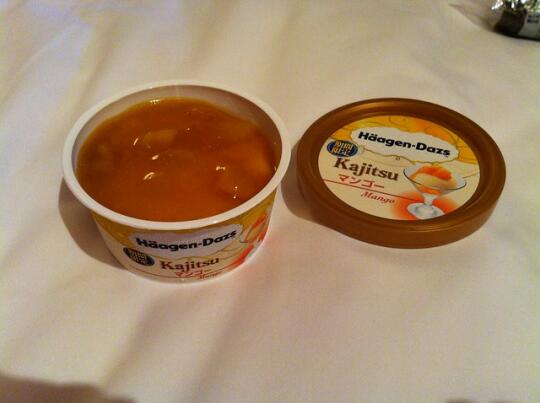 5 thoughts on “Japan Day 10, Part 3: In which we get lost, find ourselves, and then get lost again.”