As some of you might know, in January of this year I started a podcast – Miso Hungry Podcast, all about Japanese food! – with Rachael Hutchings of La Fuji Mama. (And if you didn’t know, then you should definitely go listen to one of our 25 (plus 2 mini) episodes! Seriously, go. Now. This post can wait, promise. ^_^)

A couple of months into the podcast, Rachael mentioned that she was planning a trip to Japan with her husband in the summer, as she does every summer. (They lived in Japan for a while a few years back, and his job takes him back to Tokyo for a few weeks every year.)

Half-jokingly, one of us proposed that I should go too, as a “research trip” for the podcast. The more we talked about it, the more it sounded like an awesome idea… and when I mentioned it to Son, he was totally on board.

So what started as a wild, “that would be cool” sort of idea, ended up as a full-fledged trip to Japan. In the middle of June, solidly in typhoon season, six of us (on three different flights) headed off to Japan – Rachael, her husband, and their two daughters, and Son and I. 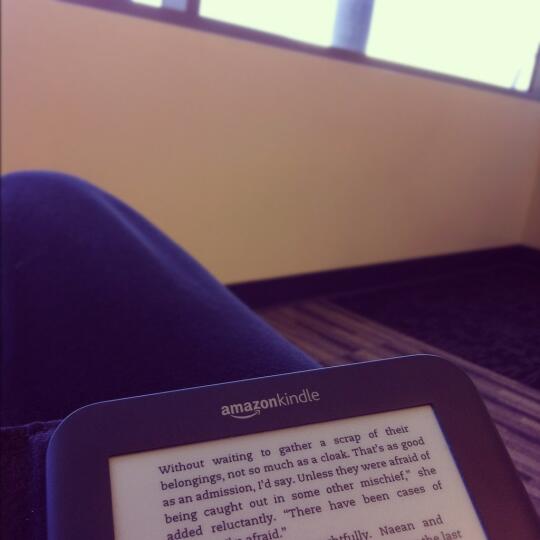 Son and I booked our flight on Singapore Air. It’s the same airline we flew the first time we went to Japan, and we highly recommend it. Even though we fly economy, they have great service, friendly flight attendants, and food that’s actually pretty good. 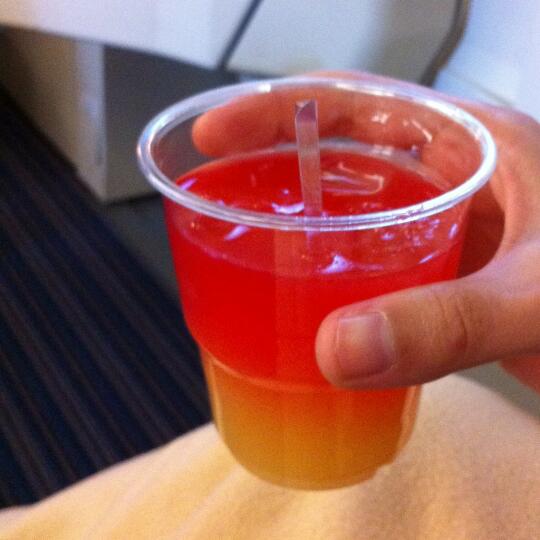 To say I’m a bit out of touch with what’s trendy/cool/”in” would be an understatement. Especially when it comes to anything having to do with any sort of alcohol.

The super-sweet flight attendant who took care of our part of the plane recommended that we get a Singapore Sling, on one of the instances when she came by with the drink cart. (I think she thought Son and I were on our honeymoon.)

So we got one to share, which she made super-weak (I’m pretty sure it was practically a virgin cocktail) because neither of us ever drink.

Of course I, the dork that I am, was sitting there thinking, “How cool, they have a cocktail named after their airline! And it’s not half bad, either… actually pretty good, for something with alcohol in it.”

(Remember the part where I said I don’t drink… and I’m waaay out of touch? Yeah…) 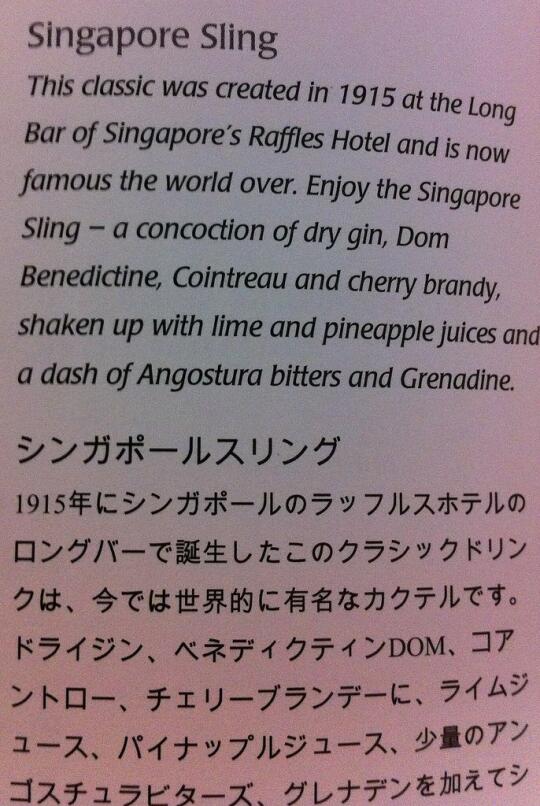 Dinner was buta kakuni (Japanese braised pork) with rice, which came with tamago and shrimp on the side, a rice cracker, a roll w/ butter, soba with dipping sauce, and chocolate brownie ice cream. For airplane food, it was damn good.

(Asian airlines always have the best food! I’m told food on the American airlines can’t even compare. Word to the wise – although both options offered by Singapore Air at each meal are pretty decent, the one with Asian food is almost always better.) 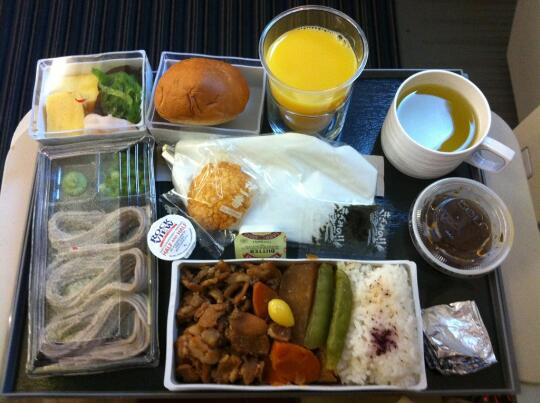 After a few hours of “sleeping” – aka Son watching various movies and me reading an entire Robert Jordan book on my Kindle, we got another light meal – this time chicken curry with rice, which came with a roll with butter, seafood salad, and a mocha cake. Again, delicious (although the cake kind of sucked.) 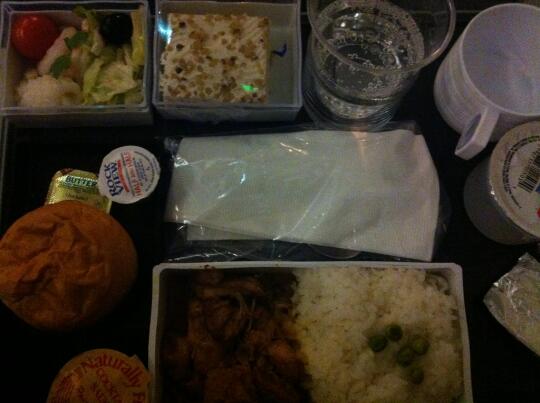 We landed at Narita Airport around 7pm Japan time… which unfortunately was juuust too late to exchange our JR Exchange Order for a JR Pass.

(PRO TIP: if you are going to be staying in one city, without traveling elsewhere much, then the JR Pass may not be worth it for you, since local trains usually aren’t too expensive. However, if you’re planning on using the Shinkansen a lot – we used it to go to Kyoto and Osaka – then it might be worth buying one before your trip to Japan.) 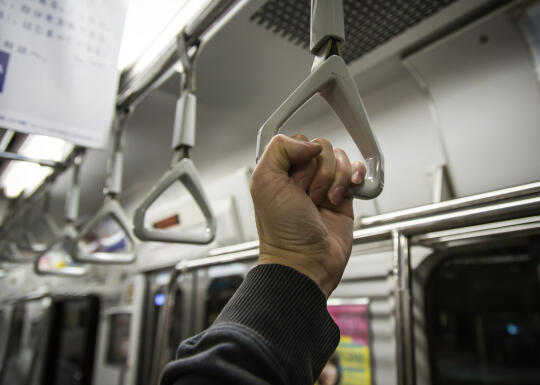 So, since we were too late to get our JR Passes, we ended up spending 2800 yen (about $35) for tickets on the Rapid train to get from the airport (which is about 1 hour away from Tokyo) to Shimbashi station (which is the closest big station to the hotel where we were staying.) 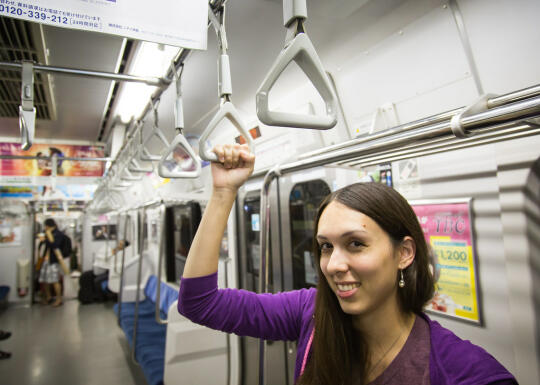 By the time we got to our hotel, we were 100% completely and totally exhausted. Also, kind of lost. (Park Hotel Tokyo, which is where we were staying, is kind of hard to find from the subway station level, and the lobby is on the 20-somthingth floor.)

And by that time, everything was closed. Luckily for us, there was a Family Mart convenience store (aka “combini”) on the subway level of the hotel building, which our bellboy was kind enough to point us to.

Thank goodness for Family Mart. Open 24-hours, always brightly lit, and always with plenty of food… it became our favorite place over the next two weeks. Every morning we would buy a bottle of water there, every night a tuna with mayo onigiri for the next morning’s breakfast… and any time we found ourselves still hungry when most restaurants were already closed (or we were too exhausted to go out), Family Mart was there with plenty of good food.

Seriously. I’m not kidding about it being really freaking good food (um, hello American convenience stores, get your act together please!)

For our first meal back in Japan, we ended up with inari sushi and futomaki, fruit jelly, and a cherry soda. (Sushi was good, Son ate the fruit jelly, and I’m generally not a fan of cherry-flavored things so I didn’t really like the soda, but Son says it was good.) All for about 800 yen (about $10). Only in Japan will I ever advocate getting convenience store sushi! ^_^ 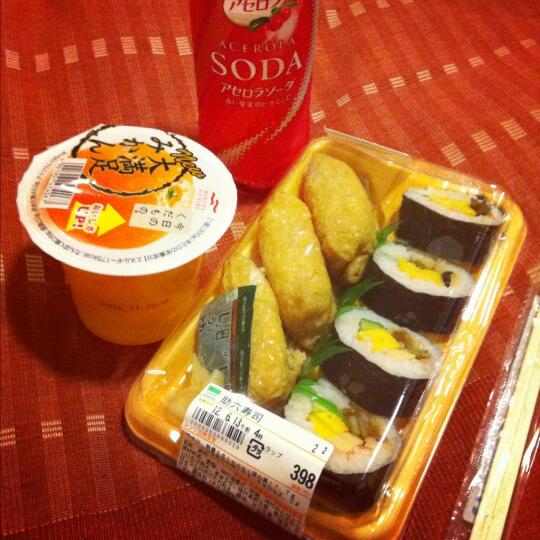 Okay, so our “first” day in Japan wasn’t so exciting… hence it being labeled “Day 0”. But the next day included ramen, cream puffs, and more ramen… so stay tuned for the next post!