An Interview with Hajime Sato 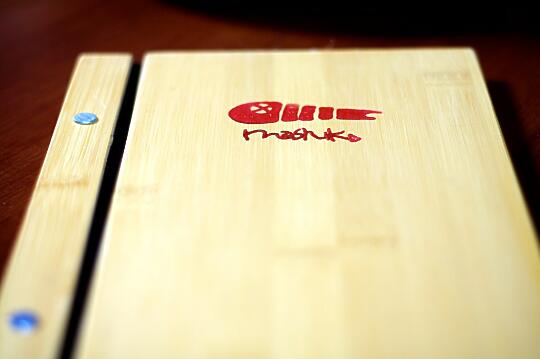 The day after the dinner at Mashiko, I was scheduled to be back at Mashiko in the afternoon, to interview Hajime and Casson.

First, Son and I sat down with Hajime and Casson – Son took pictures, I asked questions, and Hajime and Casson discussed my questions to the music of the kitchen prepping for the first evening of service with a completely sustainable menu. Though this was supposed to be Hajime’s interview (Casson’s will be posted in a few days), Casson was happy to interject his thoughts as well. 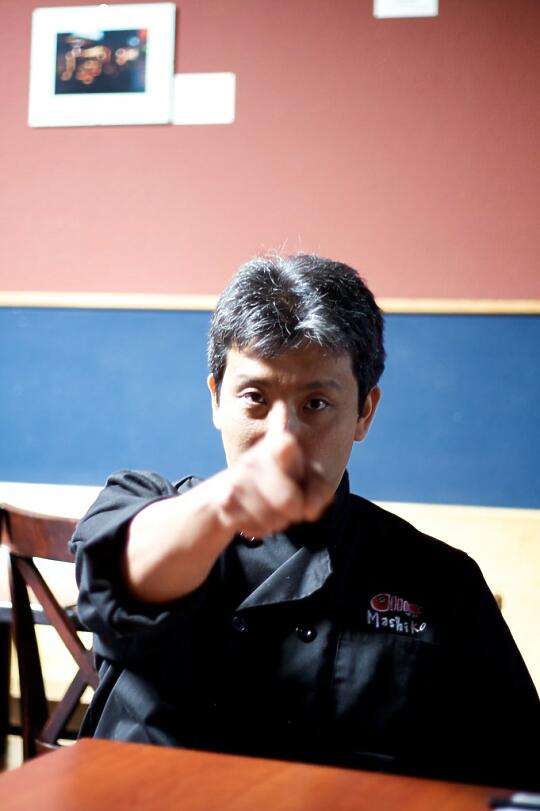 Hajime: Exactly! And I did get a stupid two year thing, small business management, but I was working at a restaurant and I really liked it. Most of the people were doing it just to make money, but I actually really liked it. So after that, I kind of kept going, and was looking for different restaurants who could teach me, and just, I guess, kept going for twenty years now. 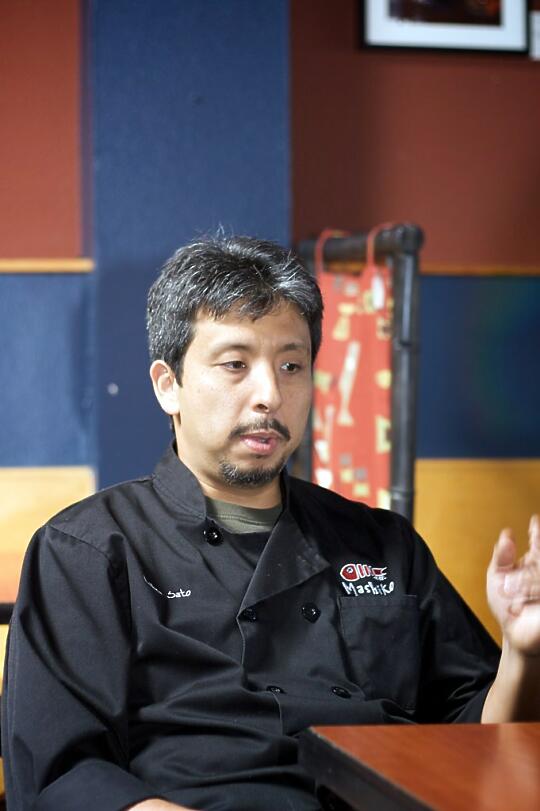 Allison: Now that you have Mashiko, what prompted the decision to make it sustainable?

Hajime: Sustainability… I did kind of think about it for a while, but what made it certain is when I went to Diane’s Kitchen… she has this kind of kitchen for catering, kind of fancy dinners, stuff like that. She called me because she knew somebody I knew and told me that Casson’s coming, and I was kind of skeptical about it… not about him, but… somebody called me and said “Can you come down here, we’re doing something.” And I was like, “Hmmm, whatever.” Actually I Googled it, like, who is this guy? It sounded legit and I went there, and he actually started talking about it, and he convinced me that this is good, this is possible, and it can be done. Of course, I didn’t know that much about it at the moment, but I promised everybody at that moment that I’m going to be sustainable in three months. If I say something, I’ll do it, no matter what. 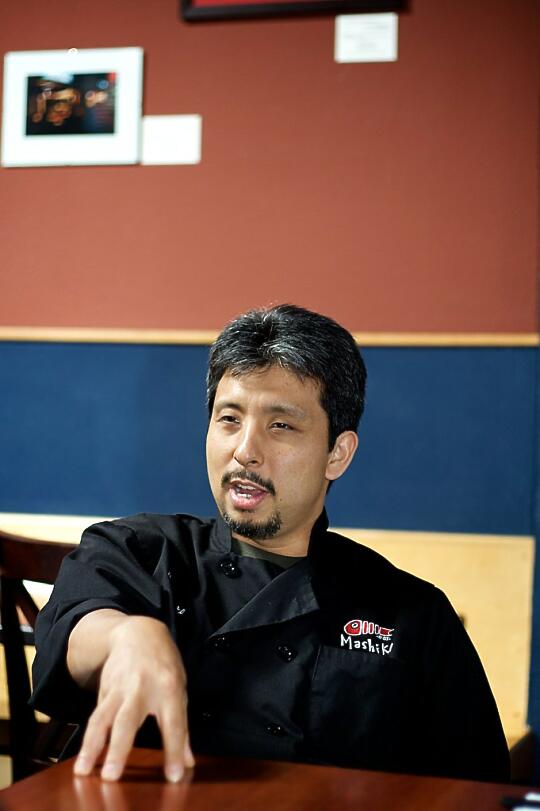 Allison: Once you made the decision, what sorts of challenges did you face in making it sustainable?

Hajime: I guess the challenges… like, okay you cannot use this and this and this, right? But… distributors don’t know. And most of the distributors for sushi bars, they don’t care about sustainability. And the people who care about sustainable fish, they’ve never served sushi bars before, so they don’t know what kind of quality or what kind of cut that I want. So I have to kind of gather information and say for the sushi bar people, “I cannot use this, this, this,” and they’re like, “Why?” Then I’m dealing with the American distributers and say, “I need those fish that you have,” but they’re like… one girl actually told me like, “Well, I have this fish that’s a week old, can you use that? You’re gonna cook it anyways, right?” I’m like, “No!” [laughs] “Would you eat it raw? Come on.” So that kind of a challenge, I guess, of explaining to people what sustainability is. Like even yesterday [at the dinner], most of the people kind of think that it’s a good thing, but don’t know exactly what it is. I guess the challenge is that. The menu making was actually kind of fun for me, a good kind of challenge and that kind of stuff, so that was not that hard compared to distribution. 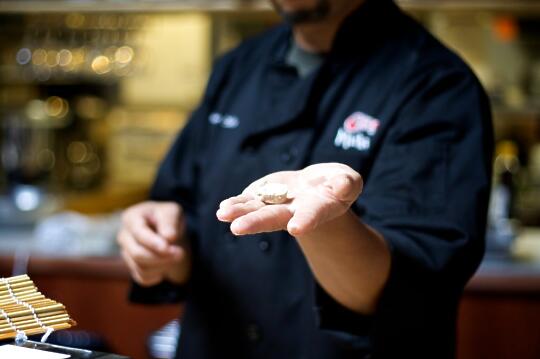 Allison: So with your new menu, do you feel in any way like you’re depriving your customers of anything?

Hajime: Meaning… what do you mean?

Allison: Meaning… probably most people who go to sushi bars are going to go expecting tuna, and unagi, and all the stuff that we’re saying “No way, no how.” Do you feel like with the new menu, that you’re keeping them from getting anything they should be getting, or do you think that it’s… sufficient, with the new menu?

Hajime: I mean, well… that’s a kind of multi-layered question. Regular customers, they’re going to be fine. I’m going to just tell them to eat, and they’re going to eat it, so I don’t have a problem with it. But non-regular customers come in, expecting to have those things, and this is the first day that I don’t have any of those things. They might freak out, like, “What kind of sushi bar is this?” And see how that’s going to affect… I don’t know if you can answer it Casson, but…

Casson: Um… “depriving” is a funny word. I… I don’t think that we’re depriving our customers of anything. I think that we’re showing them that there’re so many other ways to use and to think about sushi conceptually, and we’re actually offering them new opportunities to experience things that they’ve probably never tried before. Not only that, if we’re depriving them of anything, we’re depriving them of choices that they don’t want to make, choices that they would make unwittingly, that would harm the planet or that would harm their health and helping them get out of this very small, very very small box that is the kind of standard, run of the mill US sushi industry. So I mean, I think yeah, at first glance people could say, “Yeah I’m depriving my customers of being able to have unagi.” Why not? I mean, if they want unagi they can go down the street, no problem. What I’m doing is I’m offering them an alternative to it. They can still eat unagi if they want, just not at my restaurant. Because I won’t be a part of it.

Hajime: Yeah, I mean… some people are going to be pissed off no matter what. I mean, you can look at… like I was actually on Yelp this morning, and some people were complaining about my attitude, and my signs, and like… okay? [laughs]

Casson: Yeah, you just gotta do your thing.

Hajime: Exactly. To the point, even my reviews… either they hate me or they love me. I’m going to have to accept that. And from that point of view, even this menu’s going to be the same thing too. And… I’m going to kind of say this in a weird way, meaning… Even what people are used to, in the US at sushi bars, those items are not necessarily traditional in any way, or what you get in Japan. So… you know, it’s all about marketing or what people are used to. So changing from that to that, it can just be a switch… you know, it can be just I don’t know, new marketing of this fish, or… you know what I mean? Changing is all in your mind. That’s what you’re used to. It doesn’t mean that that’s… it’s supposed to be. Does that make sense? Yeah, it’s kind of vague, but I guess that’s kind of how I would put it. 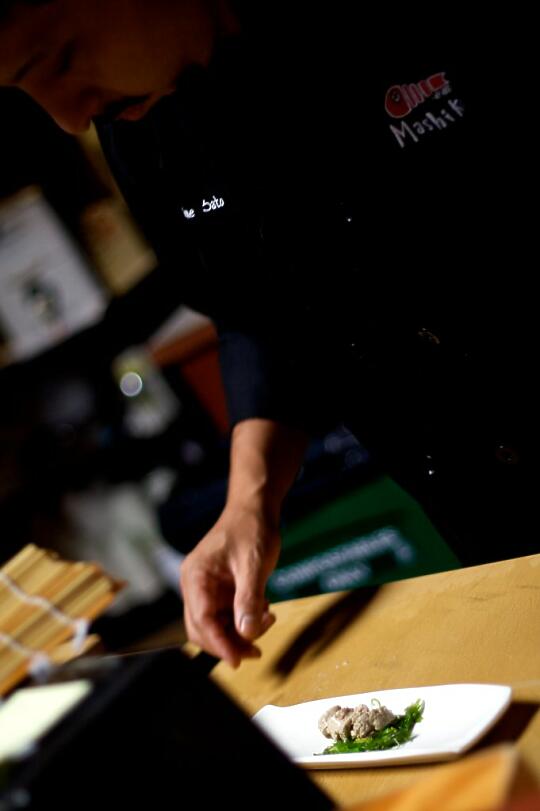 Allison: So obviously you’ve determined that this is going to be a very different dining experience here, from what it used to be or from other sushi bars. Are there any new delicacies or new types of seafood that you think your diners may not have heard about, but that they should look out for?

Casson: He’s got all sorts of things.

Hajime: Well, [Casson] has the black cod, so we have the black cod, we had that yesterday. We have the Hawaiian albacore that you should definitely start using, it is so not that expensive, dude… it’s awesome, and I don’t know why people don’t use it. We have ono, we have hebi – hebi, that’s a kind of cool thing too. Hebi is the spearfish, and I was in the Honolulu fish market about three months ago, and spearfish is not considered good fish at all. They even kind of say it’s a trash fish, they’re gonna make a fish cake out of it. Sometimes they’re even bycatch because they don’t look for it. I said, “Have you ever eaten it raw?” And they’re like, “No, it’s gross!” “Have you eaten it raw before?” “No…” So I ate it. So freakin’ good. So that… that is really good. I don’t know, even the catfish I was doing that’s really good… it’s not about just one or two fish, but just searching for different things. We have this small shiny fish called kibinago that we get from Japan that’s a really small fish, it’s like this big. And nobody uses it. It’s available, and I get it, but I don’t know. Anything that’s new. 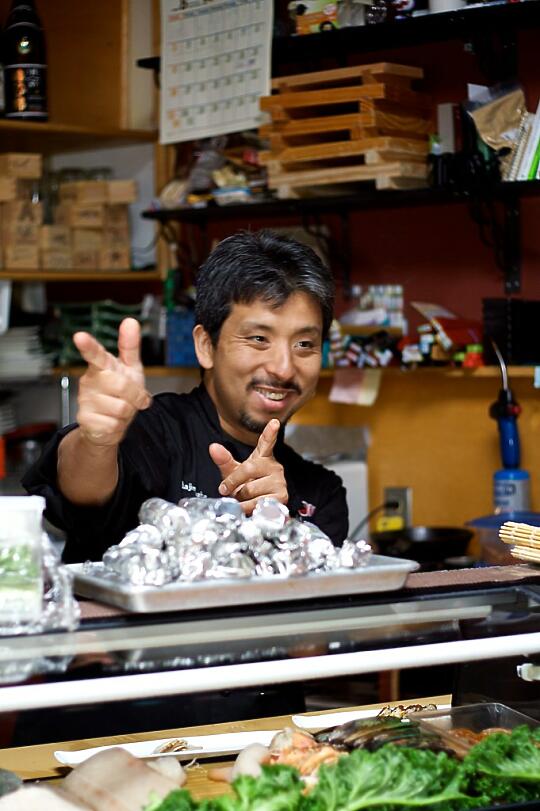 Monday I’ll post the interview with Casson, then next Wednesday I’ll wrap it up with a few extra thoughts that both men had about sustainability and the sushi business. Do you have a question about sustainability? Ask in the comments or email me, and I’ll do my best to answer your questions.

18 thoughts on “An Interview with Hajime Sato”