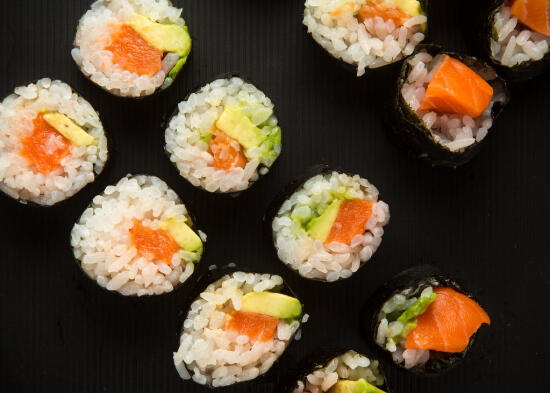 When people think of the Japanese culture, sushi often automatically comes to mind, and for good reason. Sushi began as a method for preserving fish in Japan. Rice was used in the fermentation process, as both fish and rice are in abundant supply in Japan. Over the years, the preparation changed and evolved into the sushi we know today, which looks and tastes much better and uses many ingredients aside from fish. Now, sushi is a very popular dish which is often served as a quick, cheap meal at stands all over Japan.

In the United States, sushi can range from cheaper, typical types such as the California roll and Inari-zushi, to more expensive rolls seen at fusion restaurants and nicer restaurants all across America. Many people shy away from the thought of eating raw fish, but most come back for more when they find that not only is most sushi made from ingredients other than raw fish, but that it is actually delicious!

I personally think sushi is wonderful – a little bite of heaven. Many of the recipes I provide won’t be completely traditional, but hey… they’re still tasty!

So if you’ve never had sushi, go out and try some! I promise you can find a type of sushi you like. And when you do decide you love sushi, come back and try making some with me!