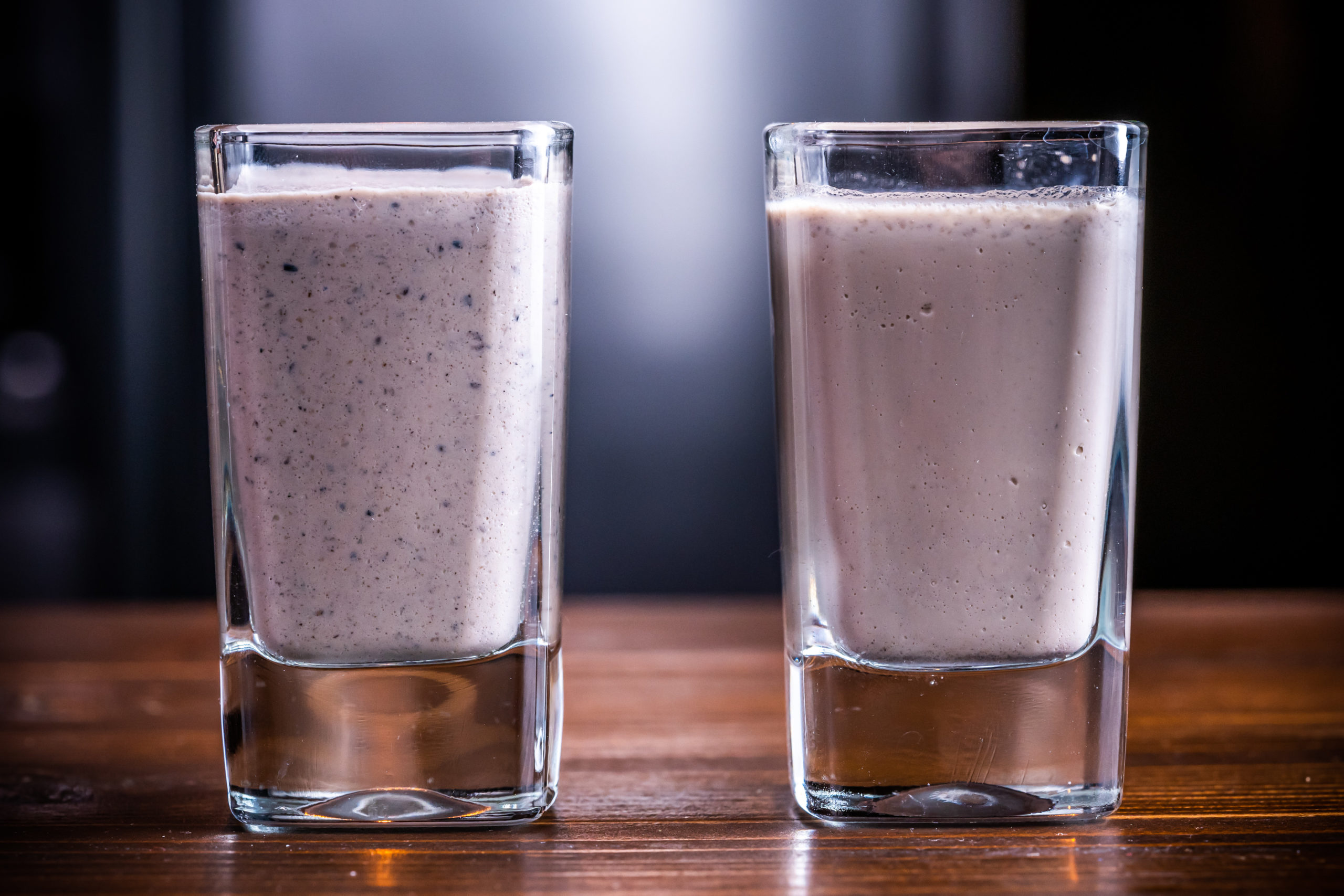 Despite being half Japanese, black sesame in desserts did not feature strongly in my childhood. Mochi and anko, white sesame and even shoyu… But it wasn’t until I was in my 20s that I had my first black sesame dessert.

Way back in 2012, I started a podcast called Miso Hungry with my friend Rachael – aka La Fuji Mama. She’d spent a lot of time in Japan, and even lived there for a while, and could not stop raving about black sesame desserts.

With that (black sesame) seed planted in my mind, it’s no surprise that a kurogoma purin sitting innocently in a refrigerator case next to the bakery at Marukai caught my eye on the way to Rachael’s house one day – which is how I ended up buying enough for all of us to try.

Wonderful friend that she is, when she saw how much I adored that black sesame pudding she decided she was going to develop a kurogoma purin recipe for me… and that’s how this recipe came to be.

A few weeks ago, when we were filming the furikake nori, the scent of blended black sesame made me crave black sesame desserts.

And whenever I’m craving black sesame desserts, this is the one I turn to – but I’m trying something a little different this time.

Did you know gelatin isn’t vegetarian? It’s actually derived from collagen from animal parts – which means our vegan and vegetarian friends can’t eat it.

Instead, I wanted to try using agar agar, which is derived from seaweed and works similarly to gelatin.

Obviously I had to make a batch of both, for a true comparison, right? This definitely wasn’t just an excuse to make more pudding.

Step one – if you’re using powdered gelatin, you need to hydrate it before you use it in your pudding, otherwise it will clump and not gel correctly. Sprinkle it over some cold water. I made the mistake of using a small bowl – it would be better to use a wider bowl or plate with more surface area, so you can make sure all of the gelatin comes into contact with the water.

Next, prepare your kurogoma – black sesame seeds. You could use a coffee or spice grinder for this, but we’re using a food processor today. Grind your black sesame seeds with a little sugar – the sugar helps the sesame seeds grind evenly, much like adding salt when you grind something using a mortar and pestle.

Once that’s all evenly ground, it’s time to make our pudding. Transfer your ground black sesame seeds to a pot. Then add milk and more sugar. Bring it to a boil, continuously stirring to prevent burning.

Once it boils, add your softened gelatin, and stir until thoroughly combined.

If you’re using agar instead, this is when you should stir in your agar agar powder, making sure it’s all mixed in.

Remove the saucepan from the heat, and stir in the heavy cream.

At this point, you want your pudding to cool to room temperature. You can put it in an ice bath, but make sure not to get any water in it!

Once the pudding has cooled, you can optionally whip it a bit to make the pudding lighter. If you used agar, it may have already started gelling by now, because agar agar gels at a much higher temperature than gelatin, so whipping it a bit will make it easier to transfer.

Ladle the pudding into containers, and refrigerate for at least four hours.

If you’d like, you can serve with a little whipped cream – and enjoy!

We loved the pudding both ways – the agar is a little firmer, and since it thickens faster, the black sesame powder is suspended in the pudding, rather than sinking to the bottom as it does in the gelatin pudding.

The gelatin version is creamy and soft, like you would expect from pudding. Black sesame gives it a nutty, earthy flavor, and it’s not too sweet.

The agar agar version is firm, moreso than jello would be. But it would be a great add-in for a boba-type drink, similar to other jellies that are often used.

We can’t decide which is our favorite – we keep flipflopping between versions, because they’re both tasty! Which do you think you would prefer?